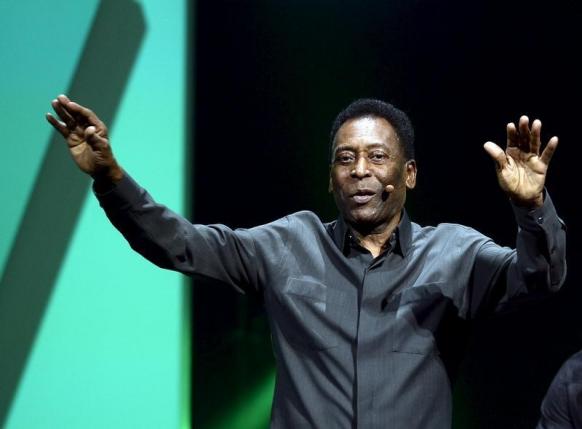 Legendary Brazilian soccer player Pele waves to the crowd after speaking during Electronic Arts media briefing before the opening day of the Electronic Entertainment Expo, or E3, at the Shrine Auditorium in Los Angeles, California June 15, 2015. REUTERS
SAO PAULO: Brazilian football legend Pelé left the hospital on Monday after undergoing back surgery, the latest in a series of health complications for the 74-year-old former star striker. Pelé, whose given name is Edson Arantes do Nascimento, spent the weekend at Albert Einstein Hospital in São Paulo after a procedure to relieve pressure on a nerve in his spine, an aide told Reuters. The hospital announced his release in a statement. This is the third time Pelé has been hospitalized since November. He spent two weeks in November at the Einstein facility with kidney problems and in May he underwent prostate surgery at the same hospital. With more than 1,280 career goals and an unequalled three World Cup titles during his playing career, Pelé is considered by many to be the greatest football player of all-time.
#Brazil #Pele #back surgery
You May Also like: