Gatlin not eligible for Athlete of the Year award: IAAF 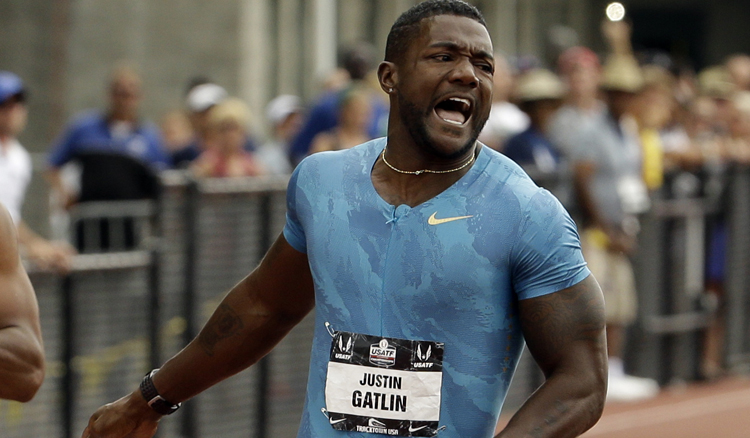 Justin Gatlin celebrates after winning the 200m race at the US Track and Field Championships in Eugene on Sunday. Photo: AP
QUAI ANTOINE, July 14 American sprinter Justin Gatlin could win world championships and go undefeated for a second consecutive season but he would still not be ineligible for the sport’s athlete of the year award, the IAAF said. A change in selection criteria makes any athlete who has been sanctioned for a serious doping offence ineligible to be shortlisted for the honour, effective this year, International Association of Athletics Federations (IAAF) spokesman Nick Davies said. Gatlin, the fastest man over 100 and 200 metres in 2015, was banned for four years after a 2006 positive test for testosterone. He has returned to the sport and is favourite to dethrone Jamaican world record holder Usain Bolt in both sprints at the world championships in Beijing in August. Davies said the IAAF Council approved the change at a meeting last November on the recommendation of the IAAF Athletes Commission. It came after uproar over Gatlin’s inclusion on the top 10 male athletes of the year list for 2014 under existing rules. The American was not among the three finalists for the honour which was won by French pole vaulter Renaud Lavillenie. “Several Council Members expressed concern that the IAAF could encounter legal challenges if the Athletes’ Commission’s recommendation that no athlete who has been sanctioned for a serious doping offense should be shortlisted for the Athlete of the Year award was approved,” minutes from the meeting recorded. “However, the majority of Council Members who took the floor supported this recommendation because it enhanced the credibility of the sport, it protected the rights of clean athletes and it assisted in further establishing inappropriate behaviour in the sport that would not be honoured by the IAAF in the future.” Britain’s Sebastian Coe, running for the IAAF presidency along with fellow vice president Sergey Bubka, was among those unhappy about Gatlin’s inclusion. “I think you’d be pretty surprised if I did sit here and was sanguine about that,” Coe said last year of Gatlin’s inclusion on the top-10 list. “I personally have big problems with it.” Gatlin, who earlier served a one-year suspension after testing positive in 2001 for an amphetamine contained in attention deficit disorder (ADD) medication he had taken since his youth, declined to comment on the criteria change. He was honoured by USA Track & Field as its athlete of the week after his sizzling 200 metres time of 19.57 seconds at the U.S. world championships trials last month.
#Usain Bolt #Justin Gatlin #International Association of Athletics Federations (IAAF) #AAF Athletes Commission
You May Also like: