Hiddink delighted as Chelsea finally turn on the style 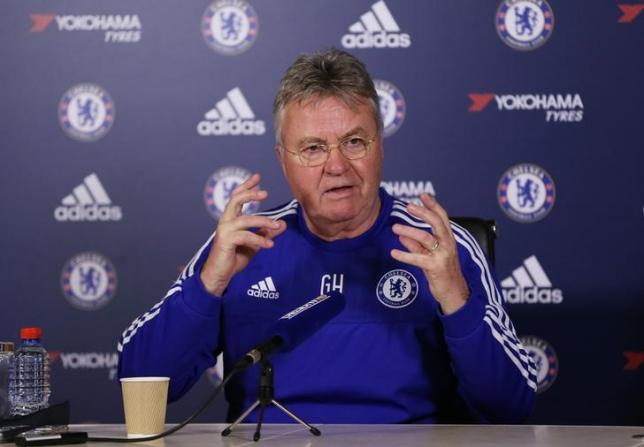 Chelsea manager Guus Hiddink during the Press Conference. Reuters
LONDON: Chelsea finally produced a performance befitting of champions to demolish Newcastle United 5-1 on Saturday and give Guus Hiddink his first home Premier League win since returning as coach. Despite being unbeaten in 12 matches in all competitions since Hiddink was named interim manager following Jose Mourinho's sacking, Chelsea have not been convincing, especially at Stamford Bridge where they have drawn five games. Against a compliant Newcastle side defending at times like a pub team, however, Chelsea's misfiring attack enjoyed themselves with masked man Diego Costa, Pedro and Willian scoring inside a blistering opening 20 minutes. Pedro and Bertrand Traore added more goals after the break as Chelsea warmed up for Tuesday's Champions League round of 16 first leg against Paris St Germain in the French capital. "We are unbeaten since December but we weren't really proud because there were too many draws, we wanted the status of being unbeaten with victories, that's why this is good," Dutchman Hiddink, whose side are 12th in the table, told reporters. "We tried to surprise them in the early period of the game in which we succeeded with two beautiful goals, and the first 20 minutes were decisive." Costa, who played with a protective mask having broken his nose in training, looked more like the player who terrorised defences early last season while Pedro, largely a disappointment since his 21-million pound ($30.5 million) move from Barcelona, enjoyed his best game in Chelsea colours. Pedro's first was a classy finish after racing clear and his second, on the hour mark, was equally impressive after being picked out by Cesc Fabregas. Hiddink, who took Chelsea to FA Cup glory during his first stint as their interim coach in 2009, reserved special praise for Costa. "He wanted to play desperately and when the mask was fitted he said he could play," Hiddink said. "The way the first goal was scored was typical of a striker in good shape." The only worry for Hiddink was a hamstring injury that forced off skipper John Terry and the quick turnaround time for the clash with PSG. "We'll see what the damage is tomorrow after an intense game but it's good to go there coming off a win," he said.
#Chelsea #Guus Hiddink #Newcastle United
You May Also like: