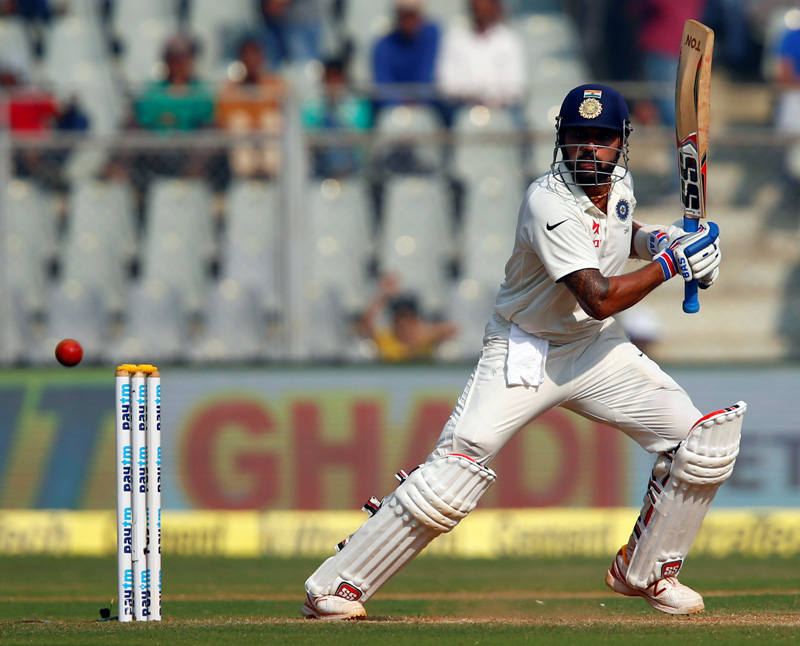 India's Murali Vijay plays a shot. Photo: Reuters
MUMBAI: Murali Vijay and Cheteshwar Pujara shared a century stand as India made a strong start in their reply to England's total of 400 on the second day of the fourth test at the Wankhede Stadium on Friday. Vijay was unbeaten on 70 and Pujara on 47 not out with India on 146 for one at the close, still 254 runs behind. READ ALSO The right-handed pair added 107 runs for the second wicket after Lokesh Rahul had fallen following an opening stand of 39 with Vijay. England captain Alastair Cook introduced spin from both ends after seven overs and there was considerable turn on offer for Moeen Ali and Adil Rashid.

India's Murali Vijay plays a shot. Photo: Reuters
Rahul hit four crisp boundaries in his 24 before off-spinner Moeen breached his defences to bowl him. Vijay twice mis-hit Rashid but the ball landed safely beyond the reach of the fielders on both occasions. The opener hit the leg-spinner for six over the long-off boundary. Pujara looked solid and hit some sublime boundaries off the back foot against the England fast bowlers. Earlier, Jos Buttler made 76 to guide the touring side, trailing 2-0 in the five-match series, to a strong total before they were all out 25 minutes after lunch.

India's Murali Vijay plays a shot. Photo: Reuters
India off-spinner Ravichandran Ashwin completed figures of six for 112 for his 23rd five-wicket haul and left-arm spinner Ravindra Jadeja took the other four wickets. Resuming on 288 for five, England lost Ben Stokes for 31 in the third over to Ashwin, who had picked up four wickets on Thursday. The umpire turned down the appeal for catch against Stokes but India managed to overturn the decision on review with the batsman leaving the field making his displeasure evident. Jadeja dismissed Chris Woakes and Rashid cheaply to boost India's chances of keeping England's total to under 350.

India's Murali Vijay plays a shot. Photo: Reuters
But Buttler and number 10 Jake Ball, playing his first match of the series and second overall, frustrated India with a partnership of 54 for the ninth wicket. Ashwin broke the stand when Ball, who was on nought when India captain Virat Kohli dropped a sharp chance at slip off Jadeja, was caught behind. Buttler repeatedly used the reverse sweep against Jadeja and hit six boundaries and a big six off Ashwin before Jadeja bowled him as he attempted another big shot.
#India #England #Alastair Cook #Cheteshwar Pujara #Murali Vijaya
You May Also like: