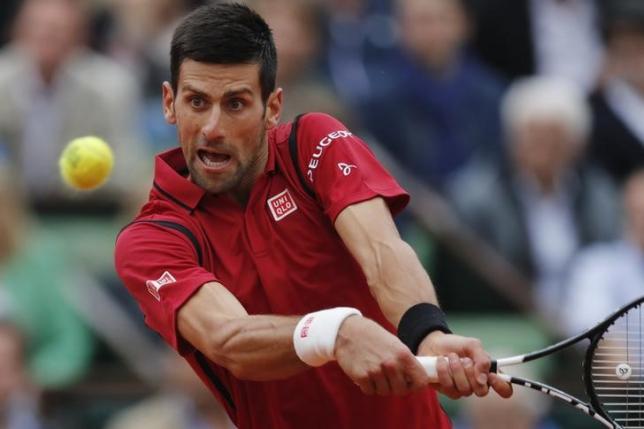 Novak Djokovic returns the ball. REUTERS
LONDON: Novak Djokovic's vice-like grip on grand slam silverware will be put to the test at Wimbledon next week but such is the world number one's dominance few look capable of loosening it. The insatiable Serb's stunning level of consistency has left his rivals running out of ideas at how to stop him and made real the possibility that the 29-year-old could even threaten Roger Federer's record total of 17 grand slam titles. In Paris earlier this month he became the first player since Jim Courier in 1992 to win the year's first two majors -- swatting away chief rival Andy Murray in ruthless fashion. It also completed his career slam, took him to equal fourth on the all-time list with 12 majors and means he holds all four of the game's most cherished trophies at the same time. What is more he has not lost at Wimbledon since Murray beat him in the 2013 final and has has appeared in eight of the last nine title matches in the slams, winning six of them. "Everyone is chasing Djokovic, there's no question about it," three-times Wimbledon winner John McEnroe said this week looking ahead to Djokovic's attempted defence of the crown. "At the majors, if you look at his records, he's approaching Roger's records, which would seem insurmountable. It's amazing." With seven-times Wimbledon champion Federer finally starting to succumb to injuries at the age of 34, he missed the French Open after 65 consecutive majors, his chances of snatching back the trophy from Djokovic seem to be receding. Although writing him off a year after his mesmerising semi-final defeat of Murray would be foolhardy. Rafael Nadal is missing with a wrist injury, which leaves Murray as the main threat, especially now he has Ivan Lendl back in his coaching corner -- the man who guided the Scot to his two victories in grand slam finals, both against Djokovic. World number two Murray warmed up with a fifth title at Queen's Club where he beat Canada's Milos Raonic in the final. McEnroe, who is working with men's sixth seed Raonic at Wimbledon got a close-hand view of Murray at Queen's and was impressed with what he saw. "Murray is playing great. He's obviously put himself in position numerous times," McEnroe said. "But at the moment there's no question that the level that Novak is at is something that you rarely, if ever, see." With McEnroe in Raonic's box, eight-times major champion Lendl working with Murray again, Boris Becker plotting for Djokovic and now Richard Krajicek fine-tuning Stan Wawrinka's grasscourt game, the battle of the super-coaches looks like being as compelling as the on-court action. Wawrinka, seeded four at Wimbledon, has never been past the quarter-finals at the All England Club, but has proved previously that he can beat Djokovic -- as has Japan's Kei Nishikori who will be seeded five. While Djokovic stands in a league of his own and Murray is positioned ahead of the pack, there are signs that a new generation could soon be breaking up the status quo. Austrian Dominic Thiem, a French Open semi-finalist and winner on grass in Stuttgart where he beat Federer recently, will be seeded eighth while Australian Nick Kyrgios, quarter-finalist two years ago, will be dangerous at 15. Germany's Alex Zverev also beat Federer in Halle last week. "Thiem, Zverev, these guys can see light at the end of the tunnel. It's an exciting time for men's tennis," McEnroe said.
#Novak Djokovic #Wimbledon
You May Also like: