Inter draw 1-1 with Palermo in Serie A home opener 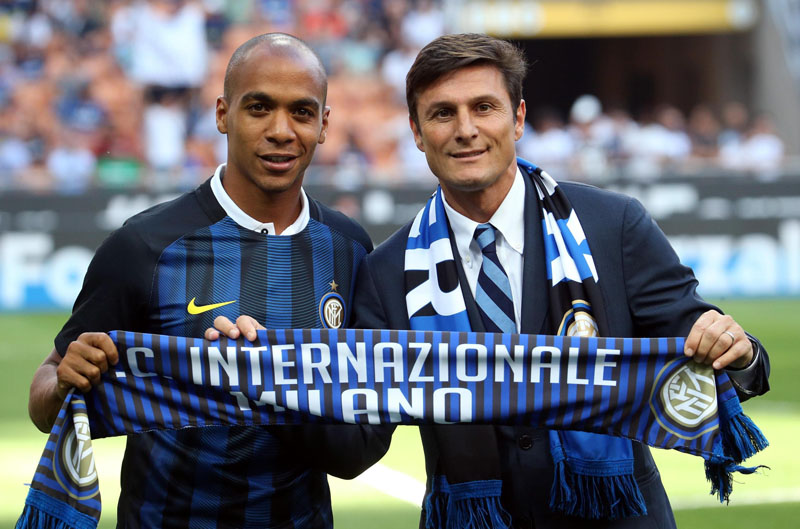 New Inter Milan Portoguese midfielder Joao Mario (left) poses with team's vice president Javier Zanetti prior to a Serie A soccer match between Inter Milan and Palermo, at the Milan San Siro stadium, Italy, on Sunday, August 28, 2016. Photo: Matteo Bazzi/ANSA via AP
ROME: Inter Milan showed signs of improvement in a 1-1 draw with Palermo on Sunday in its home opener at San Siro. The Nerazzurri's preparations for Serie A were slowed by the departure of Roberto Mancini less than two weeks before the season started and new manager Frank de Boer had a rough start with a 2-0 loss at Chievo Verona last weekend. While Inter dominated the first half, it was another difficult game as Andrea Rispoli put Palermo ahead three minutes after the break with the visitors' first shot on goal. However, Inter's prized striker Mauro Icardi equalised in the 72nd after being left alone inside the box to head home a cross from newly-signed Antonio Candreva. Brazilian-born Italy forward Eder nearly won it for Inter with another header from a Candreva cross five minutes later but the ball went wide. Ivan Perisic, Gary Medel and Icardi each produced chances early on for Inter. "My goal isn't important, because if you don't win there are no important goals," said Icardi, who was the joint Serie A scoring leader with 22 goals in 2014-15. "We played well and we created a lot but the ball didn't go in." Also, Roma wasted a two-goal advantage in a 2-2 draw at Cagliari that followed a Champions League playoff loss to Porto. Diego Perotti converted an early penalty — his third spot-kick in two matches — and Kevin Strootman got Roma's second after the break. Marco Borriello pulled one back for the hosts and Marco Sau scored the equalizer three minutes from the end with a header. Genoa, Sassuolo, Juventus and Sampdoria each have a full six points after the opening two rounds, while Napoli is two points behind. Genoa came back from a goal down to defeat Crotone 3-1 while Sassuolo, last season's revelation with a sixth-place finish, beat promoted Pescara 2-1. Crotone had to play its first ever Serie A home match 600 kilometers (375 miles) away in Pescara with its Ezio Scida stadium undergoing renovation and expansion. After Gregoire Defrel put Sassuolo ahead, Domenico Berardi scored his seventh goal in six matches this season, including the Europa League. Sampdoria beat Atalanta 2-1 with goals from Fabio Quagliarella and Edgar Barreto. Franck Kessie, a 19-year-old Ivory Coast midfielder, had put Atalanta ahead, giving him three goals with his first three shots on target attempted in Serie A. Fiorentina defeated Chievo Verona 1-0 with a goal from Colombia midfielder Carlos Sanchez, who is on loan from Aston Villa. Also, it was: Torino 5, Bologna 1; and Udinese 2, Empoli 0. A moment of silence was observed before each match to mourn the nearly 300 victims of an earthquake in central Italy on Wednesday. Representatives of Inter's new majority owners, the Chinese retail giant Suning, attended the match in Milan, and newly signed Portugal midfielder Joao Mario was presented to fans before kick-off. Inter signed Mario from Sporting Lisbon for 45 million euros ($50 million), making him the club's second most expensive acquisition after Christian Vieri. Palermo, one of several clubs to have expressed interest in signing former Inter forward Mario Balotelli, also has one point.
#Inter Milan #Palermo #San Siro #Italian serie #home opener
You May Also like: