Inter stroll to win, go eight clear in Serie A 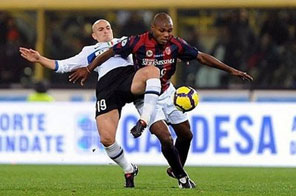 Inter Milan's midfielder Esteban Cambiasso (L) fights for the ball with Bologna's midfielder Marcelo Zalayeta during their Serie A football match at Dall'Ara Stadium in Bologna. Inter Milan got back to winning ways in Serie A on Saturday with a convincing 3-1 win over Bologna. Source: AFP

ROME: Inter Milan got back to winning ways in Serie A on Saturday with a convincing 3-1 win over Bologna at the Dall'Ara stadium extending their lead at the top to eight points ahead of Sunday's games.

In the late match, Parma beat Fiorentina 3-2 to move temporarily up to third spot.

The 10th win from 13 games this season for Italian champions Inter will undoubtedly instill confidence ahead of Inter's Champions League match at Barcelona on Tuesday.

However Inter coach Jose Mourinho said: "The Barcelona game will be a real test for my players."

Diego Milito scored his eighth goal of the campaign to give Inter the lead midway through the first half, and despite an immediate equaliser from Marcelo Zalayeta, the 'Nerazzurri' regained the lead four minutes before the break through Mario Balotelli.

With 18 minutes left, Esteban Cambiasso's low strike wrapped up a comfortable win spoiled only by the stoppage-time sending off of Maicon for dissent.

"We won without too many problems and we deserved it," added Mourinho before being questioned about the half-time substitution of striker Balotelli.

"He played a normal first half - he missed a chance, scored and then got a yellow card. Some players know how to play with a booking but he plays in the same way so I didn't want to risk doing down to 10 men."

Looking fresh after the two-week break, Inter quickly forced the home side onto the back foot and midway through the first half Milito, latching onto a downward Lucio header, was allowed time to turn and rifle home from six yards. It looked ominous for Bologna but right from the kick off they equalised with their first attack.

Martins Adailton's fine left-foot chipped the ball over the Inter defence for Zalayeta, who showed composure to bring the ball down before firing into the top corner as Julio Cesar rushed out.

The Brazilian midfielder played in Dejan Stankovic, whose left-foot finish hit the far post, ran across the goalline and struck the other post before Viviano jumped on the ball ahead of the lurking Cambiasso.

Bologna then conceded a soft goal on 41 min, when Balotelli applied the simplest of headers to a left-wing corner to give Inter the lead.

Viviano was beaten for a third time on 72 min with a goal made in Argentina - the excellent Cambiasso releasing Milito before running on to his compatriot's cross to drill home left-footed.

"We knew it was going to be tough as Inter are the best side in the country," said striker Marco Di Vaio, whose Bologna side remain 15th.

In Florence, Alberto Gilardino gave Fiorentina a deserved lead on 26min with a deft angled header from a Mario Santana cross.

Parma quickly got back on equal terms when Nicola Amoruso slid in to bury Cristian Zaccardo's inviting cross on 30 min.

The away side took the lead on 52 min when Valeri Bojinov broke the Viola offside trap to apply the faintest of touches to a Daniele Galloppa free kick.

With second spot up for grabs, the Viola responded and after Juan Vargas had crashed a left-footer inches wide on 55 min, Gilardino showed his strength to meet Vargas' corner with another trademark header for his second and the equaliser on 61 min.

Despite the blow, the away side grabbed the winner on 68 min.

With the outside of his foot, veteran Christian Panucci played in Davide Lanzafame and the substitute, racing clear, slipped the ball past Sebastien Frey.

Fiorentina fought in vain. Marco Donadel was given his marching orders on 86 min after picking up a second yellow card.

Then deep into added time, Gilardino got his head to another left-wing cross but was denied a hat-trick and the equaliser by a flying save from Antonio Mirante.

#Inter stroll to win #go eight clear in Serie A
You May Also like: