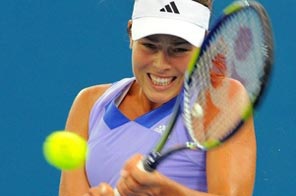 Ana Ivanovic of Serbia hits a return on the way to victory over Jelena Dokic of Australia in their first round women's singles match at the Brisbane International tennis tournament. Source: AFP

BRISBANE: Third seed Ana Ivanovic survived a big scare against Australia's Jelena Dokic to move into the second round of the Brisbane International Monday.
Ivanovic claimed a tight first set, suffered a huge lapse of concentration in the second, then regained her composure in the third to win 7-5, 1-6, 6-3 in front of a large crowd seemingly unsure as to who to support.

Former world number one Ivanovic is using the Brisbane tournament as a stepping stone in her bid to regain her place in the sport's elite following a poor 2009 marred by injury and a loss of form.

She said she started nervously but was happy with her form thereafter.

"I had a really good preparation and that gave me a lot of confidence," she said.

"I thought I was serving a lot better and moving better since the last match I played, which has been a while.

"In the second set I thought I lost a bit of intensity and started defending more and I stepped back, but then (coach) Sven (Groeneveld) pointed out I had to step up a little more and I tried to do that and dominate -- I was really pleased with the result."

After a gruelling physical conditioning programme in last year's off-season, Ivanovic completely changed her preparation leading into this Australian summer and said she was reaping the rewards.

"It's my goal to get back to the top 10 and play the championship at the end of the year," she said.

"Last year was a tough year, but I learned a lot from it and I think it helped me a lot to be mentally stronger and to know more what I want and not take anything for granted.

"This has made me appreciate it more and realise I have to work hard for every match and not just expect it to come."

She will now play Timea Bacsinszky in the second round following the Swiss player's 6-4, 7-6 (7/3) win over Russian qualifier Alla Kudryavtseva.

#Ivanovic survives tennis scare against Dokic
You May Also like: