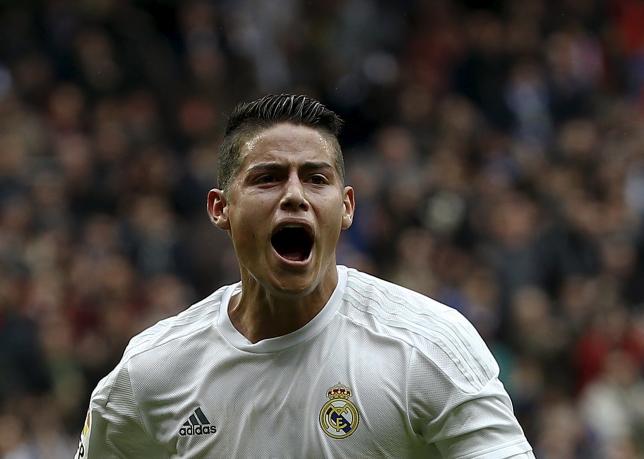 Real Madrid's James Rodriguez celebrates his goal. REUTERS
MADRID: Colombia’s James Rodriguez enjoyed a return to form with a fine goal in Real Madrid’s 4-2 win over Athletic Bilbao on Saturday. James, who had been off his best since returning from a thigh injury, struck the second goal to put Real ahead towards the end of the first half and praised coach Zinedine Zidane for a positive change in the team’s game. “I feel much better and that also helps,” James said. “It’s not only me, I think the change (of coach) has been good for all of us. “For me it’s because Zidane has given us more (freedom to) play, we play more. He talks with each one of us and that’s good when you play because it gives you attitude,” he was quoted as saying by the Spanish news agency EFE. “Each thing has its own time and you have to wait. “I wasn’t playing much up to a month ago and when you don’t play much you don’t perform much. “The goal was nice, I shouted (in celebration) like that, it put us 2-1 (up) when they (Athletic) were playing well.” Cristiano Ronaldo opened the scoring after three minutes and capped the win with a late second goal. Toni Kroos scored the third in added time in the first half. Former Real midfielder Zidane began his first senior coaching job when he took over from the sacked Rafael Benitez early last month. Real have scored freely in winning four and drawing one of their last five matches under Zidane. James' return to form is timely as Zidane prepares the team for Wednesday’s Champions League last-16 first leg away to AS Roma. “I’m happy for his goal and because little by little he’s getting rhythm,” said Zidane.
#Real Madrid #James Rodriguez
You May Also like: