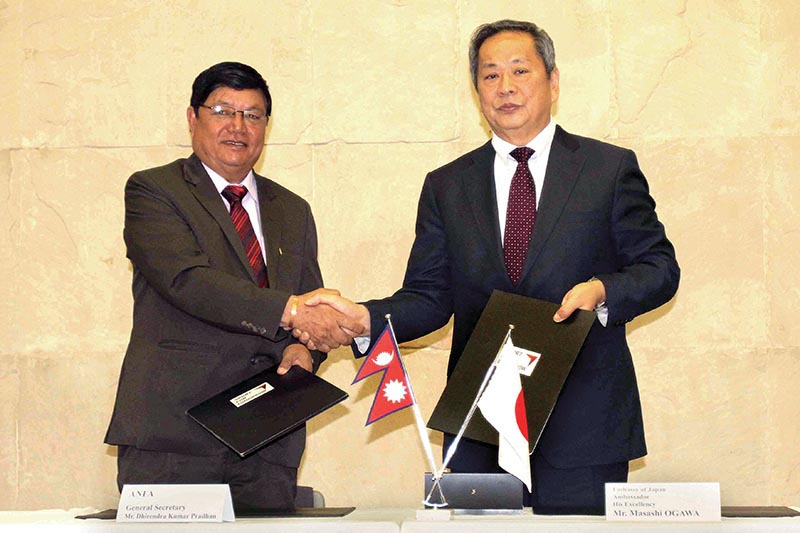 Japanese Ambassador to Nepal Masashi Ogawa and ANFA General Secretary DhirendraPradhan (left) exchanging the MoU at a programme in Kathmandu on Wednesday. Photo: THT
Kathmandu, February 28 Japanese government has agreed to provide the All Nepal Football Association with the financial assistance of $71,581 to improve the facilities of the ANFA Complex grounds in Lalitpur. Japanese Ambassador to Nepal Masashi Ogawa and ANFA General Secretary Dhirendra Pradhan signed the Memorandum of Understanding for the project amidst a programme at the Embassy today. Ambassador Ogawa informed that Japan would provide the amount under the Grant Assistance for Cultural Grassroots Project and Sport for Tomorrow initiative. As per the agreement, ANFA would use the amount for the renovation of players’ changing room, rest room facilities for spectators, media box, VIP box along with technical room. “Upgrading the facilities of the ground will add the convenience for footballers as well as spectators and also contribute in improving ANFA’s services and training programmes. Similarly, the project will also contribute in improving the sporting sector in the country and enhance relations between the two countries,” said Ogawa. ANFA President Narendra Shrestha said the football governing body would be able to host international matches after with the completion of the project. Meanwhile, Japan International Cooperation Agency renewed the contract of ANFA Technical Director Chiaki Takeda for one more year. Takeda has been serving at the ANFA for the last two years.  Ambassador Ogawa said this was first occasion that JICA had appointed a technical person for such a long period. ANFA President Shrestha informed the local coaches will work under Takeda and the Japanese will be responsible for managing training for the national football teams. Shrestha also said the ANFA renewed the contract of head coach Gyotoku Koji for one year. Koji has been at the helm of the national team for the last two years. Koji said he was happy to get the extension and added that he would focus on SAFF Championship to be hosted by Bangladesh from September 4-15. “My first priority will be to win the SAFF Championship and we will start with improvement in technical as well as tactics of the team,” said Koji. Koji said the training for the AFC Asian Cup Qualifiers last match against Yemen would start from March 4. Nepal are scheduled to play their last match of Group F on March 27.
#Lalitpur #Japan #All Nepal Football Association #SAFF Championship #Japan International Cooperation Agency #JICA #memorandum of understanding #ANFA Complex #ANFA Complex grounds #Financila assistance
You May Also like: