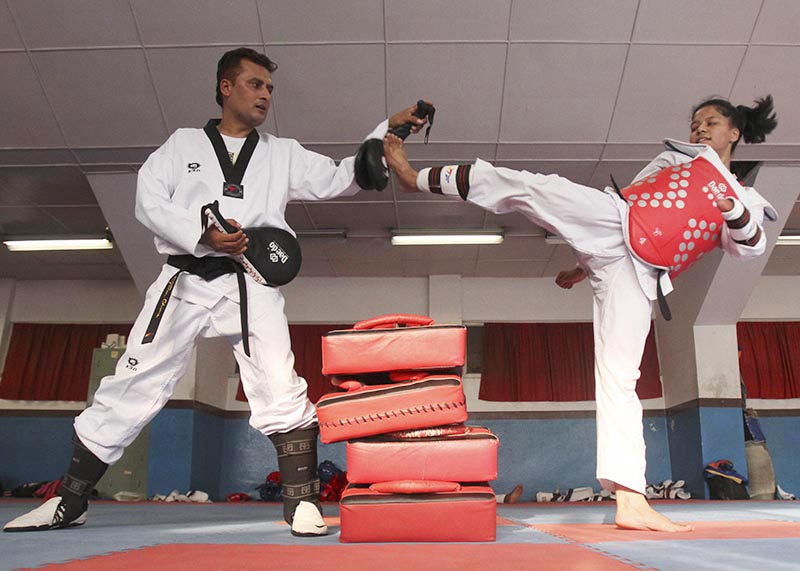 Actually, Kalyan’s brother Yadav, who was a taekwondo player himself, brought in the idea of introducing para-taekwondo in the country after he lost his palm in 2012 in an accident in a South Korea factory.

Despite losing palm, Yadav continued practicing taekwondo and he shared the idea with his brother after taking confirmation from World Taekwondo Federation and Nepal Taekwondo Association about his participation in the fourth World Para-taekwondo Championship. The Kunwar brothers came back to Nepal and formally began the journey of para-taekwondo.

Yadav became the player and Kunwar took the coach’s responsibility. Luckily, Yadav got chance to take part in the fourth World Para-taekwondo Championship in 2013 in Switzerland and he came up with a bronze medal in his maiden participation. Yadav also won silver medal in fifth edition of the championship held in Russia 2014 under his brother’s coaching.

World Taekwondo Federation formed the Para-Taekwondo Committee in an effort to develop and promote taekwondo to athletes with disabilities. According to Kunwar, Nepali para-taekwondo players have bright future with the capabilities of bringing international medals.

And the number of medals won by Nepali players also show that they can do better.

“If players do hard work, they can achieve accolades in the discipline as Nepali players have high chances of playing in international events. Actually, Nepali players need to beat four to five opponents to get selected for the international events as there are few players in the country. Similarly, players can win international medals by winning a couple of fights,” says Kalyan, who also provides training at Kathmandu Vidya Kunja and ECDC. Kunwar attended a 14-day para-taekwondo coaching course in South Korea in 2016 and became a certified coach. “The training helped me a lot to train the players and teach them new methods and techniques,” he adds.

Although, Nepal have won number of medals and there are high chances of success for Nepali players, it is difficult for Kunwar to get para-taekwondo players. “Actually I have to work very hard to find players. At the early stages, I went to different associations and organisations to look for potential players. No one believed me and instead took me negatively as they thought I was looking to take benefit out of them,” remembers Kunwar.

Currently 11 players, including three women, are practicing taekwondo under Kunwar. It was Kunwar who convinced Sita Bhandari, who was an para-athlete, to try para-taekwondo. “As she was preparing for the 2014 Para Asian Games at the Dasharath Stadium, I convinced her to choose para-taekwondo as I saw potential in her. We also have a number of players from Tribhuvan Army Club who were injured during the Maoist insurgency,” Kalyan adds.

He feels that it is difficult to motivate people for para-taekwondo as differently-abled individuals think they cannot practice taekwondo. “I try to convince them by telling every aspect about para-taekwondo, including its benefits. Teaching them about their safety is also one of the priorities,” he adds.

Kalyan does not have much players with him but he has firmly set his eyes for a Paralympics — Olympic Games for differently-abled athletes — medal. “My main target is to get my players selected for the Tokyo Paralympic Games through qualification and guide at least one of them to a medal. And that will be the best moment of my life as well as for the players and the nation,” he added.