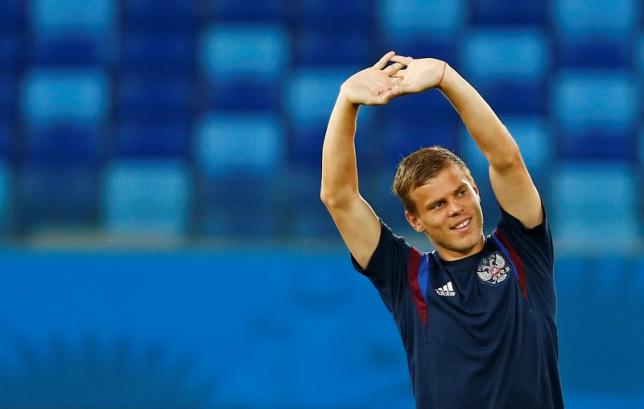 Russia's national soccer team player Alexander Kokorin stretches during a training session in the Pantanal arena in Cuiaba, June 16, 2014. REUTERS
MOSCOW: Former Manchester United and Russia winger Andrei Kanchelskis has been sacked as head coach of Russian third tier club Solyaris Moscow after just over three months in charge. "Kanchelskis leaves the team along with his coaching staff," the club's president Vladimir Ovchinnikov told Russian newspaper Sovetsky Sport on Tuesday. The 47-year-old took over at Solyaris, who play in Russia's Second Division West, in January, but was sacked as their promotion hopes faltered. Solyaris are second in the table, 12 points behind the leaders Khimki with seven matches remaining. Only the division's winners are promoted at the end of the season. Kanchelskis, whose searing pace made him an important part of the Manchester United side that clinched two Premier League titles in his four-year spell at the club from 1991, also played for Everton, Fiorentina, Glasgow Rangers and Manchester City. He retired from playing in 2006 and has since had head coach roles at Russian clubs Torpedo-ZIL Moscow, FC Ufa and Latvian side Jurmala.
#Manchester United #Andrei Kanchelskis
You May Also like: