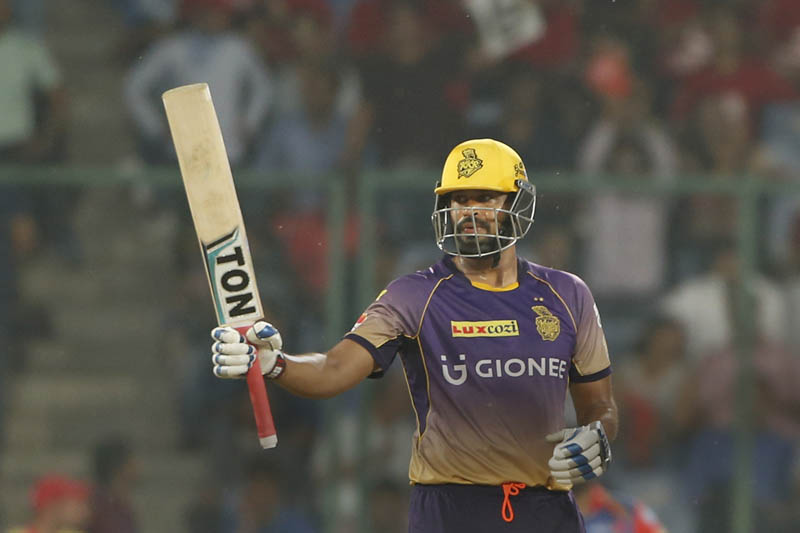 Kolkata Knight Riders' Yusuf Pathan raises his bat after scoring fifty runs during their Indian Premier League (IPL) cricket match against Delhi Daredevils in New Delhi, India , Monday, April 17, 2017. Photo: AP
MOHALI:  Kings XI Punjab kept their playoffs hopes alive with a 14-run victory over Kolkata Knight Riders in a must-win Indian Premier League match on Tuesday. After being sent in to bat, Kings XI captain Glenn Maxwell's 44 helped his side to a total of 167-6. In reply, Knight Riders' explosive opener Chris Lynn smashed 84 off 52 balls, before Kings XI's bowlers made a comeback and restricted their opponents to 153-6. Kings XI have 12 points from six victories and still need to win their remaining two matches, against leaders Mumbai Indians and Rising Pune Supergiant. Knight Riders are currently second with 16 points and have one more game against Mumbai Indians. "We probably left ourselves 10-15 (runs) short, but the way we scrapped on the field and the way we bowled, outstanding," Maxwell said. "They (bowlers) were probably at their calmest, they knew what they wanted to do and executed it well. Still hanging in there by the skin of our teeth, but we're giving our fans something to cheer for." Lynn and Sunil Narine yet again provided Knight Riders a brisk start of 39 runs off 22 balls before Narine was outfoxed by Mohit Sharma's off-cutter and was clean bowled. But Lynn continued to dominate the bowlers and Knight Riders cruised to 78-1 before slipping to 79-3 in the 10th over, losing captain Gautam Gambhir and Robin Uthappa to leg-spinner Rahul Tewatia in one over. Seamers Mohit Sharma (2-24) and Sandeep Sharma then bowled steadily in the last five overs. When Lynn was run out in the 18th over after hitting eight fours and three sixes, the game clearly swung in favor of Kings XI. "I thought me and Robin getting out was the turning point," Gambhir said. "Credit to Kings XI, they hung in there and never gave us easy runs." Earlier, Kings XI felt the absence of their prolific run-scorer Hashim Amla at the top order, after the South African opening batsman had to leave IPL because of national duty. Martin Guptill was trapped lbw by Narine off a straight delivery. Chris Woakes (2-20) had Shaun Marsh clean bowled off a delivery which came back enough into the left-hander as Kings XI struggled at 56-3 in the ninth over. Maxwell and Wriddhiman Saha (38) put on 71 runs for the fourth wicket stand off 42 balls, but just when Kings XI looked to accelerate they lost both set batsmen in successive overs. Maxwell lofted left-arm spinner Kuldeep Yadav (2-34) for two sixes in the 16th over but was brilliantly caught off the next delivery by Woakes at long-on before Yadav had Saha stumped.
#India #Indian Premier League #Sunil Narine #Kolkata Knight Riders #Kings XI Punjab
You May Also like: