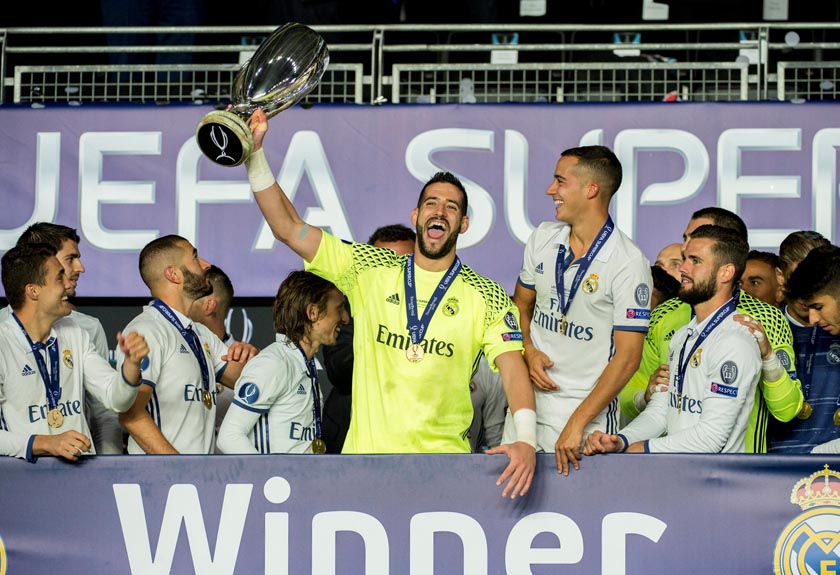 Real Madrid's keeper Kiko Casilla with the cup of UEFA Super Cup 2016. Photo: . Ned Alley/NTB Scanpix via Reuters
Dani Carvajal scored a stunning late goal as Champions League winners Real Madrid beat Europa League holders Sevilla 3-2 after extra-time in an all-Spanish UEFA Super Cup thriller in Trondheim, Norway on Tuesday. Right back Carvajal went on a weaving run in the Sevilla half in the 119th minute before lifting the ball over goalkeeper Sergio Rico and being mobbed by ecstatic team mates. "I stole the ball, saw the space and went forward," the defender told Spanish television. "The essence of Real Madrid is never to give up." Real looked down and out when they trailed 2-1 with one minute to go in normal time but captain Sergio Ramos took the match into extra-time with a last-gasp header from a cross by Lucas Vazquez in front of a crowd of 21,166. Earlier, the Madrid club, who were without Cristiano Ronaldo, Gareth Bale, Toni Kroos and Pepe, took the lead in the 21st minute with a superb curling shot by Marco Asensio from 30 metres. Sevilla reacted in positive fashion and were rewarded in the 41st minute when Franco Vazquez, who joined from Palermo in July, levelled with a low, left-foot volley. Jorge Sampaoli's men then went in front with a penalty in the 72nd minute after Ramos brought down Vitolo. Yevhen Konoplyanka, who had come on as a substitute five minutes earlier, sent Real goalkeeper Kiko Casilla the wrong way from the spot. After Ramos equalised, Sevilla's Timothee Kolodziejczak was sent off for a second bookable offence after a late challenge on Lucas Vazquez three minutes into extra-time. Real laid siege to the opposition goal for most of the additional 30 minutes and Sevilla needed Rico to pull off save after save. Carvajal's memorable late goal meant Sevilla, who have won the Europa League for the last three years, suffered a hat-trick of Super Cup defeats. GREAT SIDE "We fought to the end against a great side," said Sevilla defender Nico Pareja. "We did not let them have the ball but in a small detail we lost a game that we had under control. "We know that is what Real Madrid are like and you cannot give them even one chance." Real lifted the trophy for the third time while coach Zinedine Zidane became the fifth man to win the Super Cup as a player and manager, following in the footsteps of Carlo Ancelotti, Diego Simeone, Pep Guardiola and Luis Enrique. "I have to highlight the collective work," said Ramos. "To start the season by winning a title is fantastic. "We were not at full strength but we worked hard and we were rewarded." Sevilla next meet La Liga champions Barcelona in the Spanish Super Cup on Sunday. Real begin their league campaign against Real Sociedad on Aug. 21.
#Real Madrid #Sevilla #UEFA Super Cup #Dani Carvajal
You May Also like: