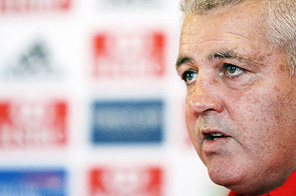 LONDON: The Lions have abandoned their initial plan to dominate South Africa physically and rely on grunt to deliver the Test series. They will look to move the Springboks around at Absa Stadium tomorrow, relying on the speed of their forwards and pace behind.
"We have gone for mobility in the pack," the Lions' forwards coach, Warren Gatland, said. "We have to move South Africa's eight around and play through a number of phases, asking questions of their tight five. If we get involved in a set-piece battle or go one-on-one with them physically, we will be getting into the sort of contest they enjoy and are good at.
"Our best performances this tour came against the Golden Lions and the Sharks, and a number of the combinations that did well in those games will be in action tomorrow. It is the way it has worked out, but we scored 15 tries to one in those matches."
It means that nine of the side will be making their first afternoon appearance of the tour, with the temperature forecast to reach 24C on a cloudless day. One blessing for the Lions is that they will at least be operating at sea level before returning to altitude for the final two Tests.
"It is going to be a huge occasion, certainly the biggest I have been involved in as a coach," Gatland said. "Supporters have arrived here in numbers and that will give the players belief and confidence. Ian McGeechan said to me that he knew what it must be like living in Wales because people are stopping you wherever you go.
"We have to impose our game on South Africa. We have had a dominant scrum all tour and our line-out is effective. The breakdown is going to be crucial and we have already met the referee [Bryce Lawrence] to discuss his interpretation. He wants both sides to be positive in the tackle area and he wants it to be a contest for possession.
"Each referee on this tour has had a different interpretation at the breakdown and it is a question of adapting quickly. We just have to hope that Bryce Lawrence is strong tomorrow so that both teams can play rugby."
South Africa raised the issue with Lawrence of the Lions' scrummaging technique, claiming it was illegal, something the tourists dispute. "All I said to him was that the stronger scrum should be allowed to exploit its dominance," said Gatland, who was asked what has become a repetitive question this week: why was Andrew Sheridan left out of the side?
"Gethin Jenkins is one of the best loose-head props in the world," Gatland said. "He hits up to 40 rucks a game, makes at least 10 carries and even more tackles. Those are amazing statistics for a prop and he is a very intelligent rugby player."
Jenkins was penalised for collapsing scrums in his last outing, against the Sharks, but said the referee, Jonathan Kaplan, got it wrong. "Their tight-head was not binding properly and kept putting his right hand on the floor," the prop said. "I did not want to say too much on the field and every referee is different. The battle up front will be key and I think there is mutual respect between the two front rows."
The Lions tight-head prop Phil Vickery said his admiration for the South Africa captain, John Smit, was so great that he did not begrudge the Springboks' lifting the Webb Ellis Trophy after Smit led his side to victory in the 2007 World Cup final against England in Paris.
Asked if he was looking for revenge after being part of the beaten England pack that day, Vickery said: "You gain nothing by living in the past. That was then and this is now. I have as much respect for John Smit as I do for anyone in the game, and he deserved to lift that trophy. I look forward to having a chat with him tomorrow evening, but that will not stop us hammering into each other during the game.
"This is as big as it gets for a rugby player in Britain and Ireland. Playing for the Lions is the ultimate, and I am as nervous as I have ever been. Anyone who says that nerves ease the older you get is talking rubbish. I played for a winning Lions side in 2001 in Australia and I am desperate to repeat that experience.
"There are only two true tests in rugby as far as I am concerned – France and South Africa. We have to get into the game immediately: the first collision, the first scrum, the first pass, the first line break will all have impact. Then it is about who adjusts quickest to the referee, who thinks on their feet and who keeps the coolest head. This will be my last Lions tour as a player and I intend to savour every moment."

#Lions change tactics for opening skirmish
You May Also like: