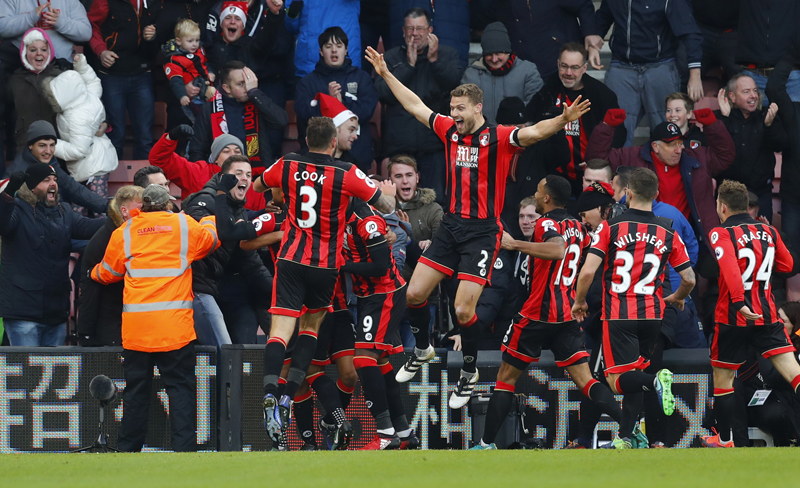 Bournemouth's Nathan Ake celebrates scoring their fourth goal with teammates. Photo: Reuters
LONDON: Bournemouth's Nathan Ake grabbed a stoppage-time winner in a dramatic 4-3 victory over Liverpool, who twice surrendered a two-goal lead on Sunday. Senegal international Sadio Mane and Belgian striker Divock Origi, starting a league game for the first time this season, established a 2-0 lead for the visitors midway through the first half. Callum Wilson halved the deficit from a penalty 11 minutes into the second half, but within seven minutes, Emre Can's fine effort from the edge of the penalty area restored the two-goal cushion. It was snatched away, however, in stunning fashion with three Bournemouth goals in the last 20 minutes. Substitute Ryan Fraser and defender Steve Cook scored in the space of three minutes to bring Bournemouth level and in added time Chelsea loanee Ake grabbed a stunning winner after a mistake from Liverpool keeper Loris Karius. It was Liverpool's first defeat in the last 12 league games and left them third in the Premier League, four points behind leaders Chelsea.
#Liverpool #English Premier League #Bournemouth #Sadio Mane #Divock Origi #Loris Karius
You May Also like: