Liverpool collapse nothing to do with protest, says coach 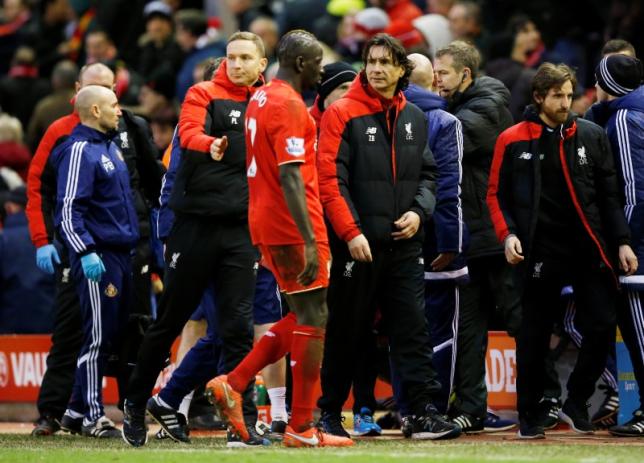 Liverpool coach Zeljko Buvac with Mamadou Sakho after the game. Reuters
LONDON: A mass protest by fans over ticket prices was not responsible for Liverpool's collapse as they allowed Sunderland to fight back to snatch a 2-2 Premier League draw on Saturday, said assistant coach Pep Lijnders. In the 77th minute at Anfield, with the home team 2-0 up, thousands of supporters left their seats and headed for the exits in a pre-planned walkout to highlight discontent over the club's ticket plans. Development coach Lijnders, among those taking charge of first-team duties while manager Juergen Klopp was undergoing an appendix operation, watched ninth-placed Liverpool concede twice in the last eight minutes after the walkout. Goals from Roberto Firmino and Adam Lallana had put Liverpool in control before Adam Johnson and Jermain Defoe replied for relegation-haunted Sunderland. "We have one of the best supporter groups in the world ... and if they want to make a statement they have all the right to make a statement," Lijnders told reporters. "Of course it didn't affect the players. It probably changed the atmosphere in the stadium but not the mentality of the players." Supporters' groups had urged fans to walk out, the 77th minute being symbolic of the 77 pounds ($111) top tickets on offer for the new main stand next season, a price widely considered to be unacceptably high. Fans sang the club anthem "you'll never walk alone" before chanting that "enough is enough". Liverpool chief executive Ian Ayre, though, has staunchly defended the pricing structure.
#Liverpool #Premier League #Pep Lijnders
You May Also like: