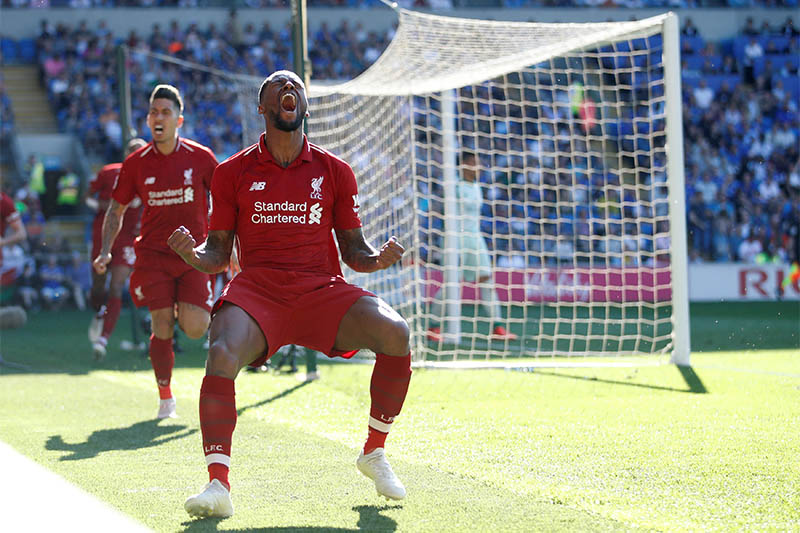 Liverpool's Georginio Wijnaldum celebrates scoring their first goal. Photo: Reuters
CARDIFF: Liverpool's 2-0 win at Cardiff City on Sunday restored their two-point lead over Manchester City in the Premier League title race but their inspired breakthrough goal came only as the result of a halftime chat about set pieces. Juergen Klopp's side had been struggling to create clear openings against a determined Cardiff defence and went in goalless at the break. But in the 57th minute, a corner was played low and deep by Trent Alexander-Arnold to Georginio Wijnaldum, who was free to drive it home in the penalty area with a sweet first-time drive that finally set Liverpool on the way to victory. "It was so smart," said Klopp. "We used experience from the first half for that corner in the second half. "It was not from the training ground, it was from the dressing room at halftime when the boys decided to do that. I love that, a brilliant goal." Klopp said that the team had realised that their normal routines had not been effective and opted to move to another approach. "If you are not happy with all of the things on the day then we have to try something different. That's difficult on the pitch to decide because you need too many players being involved. "But at halftime, it is possible so they did it. Brilliant, I love it." The hard-fought win puts the pressure on City ahead of their Manchester derby on Wednesday. They have to win their game in hand to regain the lead by a point. Then come three more games for both sides which will determine the outcome of the title. Klopp was delighted that his team had been able to battle through a difficult test on a dry, hard surface to pick up the three vital points. "Going to Cardiff, you have to work there. We spoke a lot about this game, how special it is, how special the situation is for the opponent just to make clear what we had to do today," he said. "It was not a game for a little bit of playing around, it was a game for a 100 percent fight, a battle of will again and who wants it more?"
#English Premier League #Liverpool FC #Juergen Klopp
You May Also like: