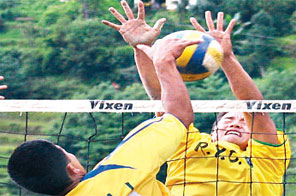 Players of Mali VDC and Ramechhap Youth Group (right) in action during their semi-final match at the Hemanta Memorial Cup Open Volleyball Tournament in Jiri on Thursday. Source: Agencies

Shyama, Ramechhap win
JIRI: Defending champions Shyama VDC and Ramechhap Youth Group entered the final of the Hemnata Memorial Cup Open Volleyball Tournament here today. In the day’s semi-finals, Shyama defeated Singati VDC 14-25, 25-16, 25-17, 26-24, while Ramechhap outplayed Mali 25-14, 25-16, 25-18. The final is slated for Friday. The top four teams will receive Rs 30,000, Rs 20,000, Rs 10,000 and Rs 5,000 respectively. — HNS
U-14 hammer Delhi
KATHMANDU: The Nepali Under-14 team registered a 7-0 win over Delhi team in the Subroto Mukherjee Cup Football Tournament in New Delhi on Thursday. Rishi Thapa (29, 32) struck twice, while Rungrihang Rai (12), Firon Magrati (34), Anil Gurung (37) and Krishna Raj Lama (58) netted one goal each after Heman Gurung had opened the scoring in the 10th minute. In the first match on Thursday, the Nepali team defeated Assam 3-2, on goals from Rungrihang, Heman and Firon. The Nepali team will take on Jharkhand team on Friday. The event is organised by Indian Air Force. — HNS
Super Sixes rescheduled
KATHMANDU: The organiers on Thursday rescheduled the Soaltee Crowne Plaza Super Sixes Cricket Tournament for October 21-25 at the Tribhuvan University Stadium. The organisers, Soaltee Crowne Plaza were forced to reschedule the fixtures after heavy downpour rendered the ground unplayable. Only 10 matches were complete over the two days on Tuesday and Wednesday. Citizens International Bank and Spice Nepal have already qualified for the Super League after winning both of their two Group ‘A’ and ‘B’ matches respectively. the two matches, APCA Nepal vs Bank of Asia and Indian Embassy vs NMB Bank, which were washed out after the first innings will now be replayed on October 21, said the organisers. Top two teams from each of the eight groups will qualify for the Super League. — HNS
Thapa loses in semis
KATHMANDU: Veteran tennis player and President of Rastriya Prajatantra Party Kamal Thapa fell in the semi-final of the Veterans Tennis Tournament in Kolkata on Thursday. Thapa lost against the defending champion Nagraj 6-3, 6-0 in the tournament, organised by the All India Senior Tennis Association, for the players above 45 years of age. Thapa entered the semi-finals with a 6-2, 6-4 win over Yogesh Sah of India in the quarter-finals on Wednesday. — HNS
Chaudhary feted
KATHMANDU: Nepal Tug-of-War Association
on Thursday felicitated the Member Secretary
of the National Sports Council Hari Babu Chaudhary at a ceremony. President of the association, former AIG of Armed Police Force, Sahabir
Thapa, said the tenure of Chaudhary would be an important era for the development of sports in The country. Thanking the association for the felicitation, Chaudhary said he felt like being with his family members and friends. — HNS