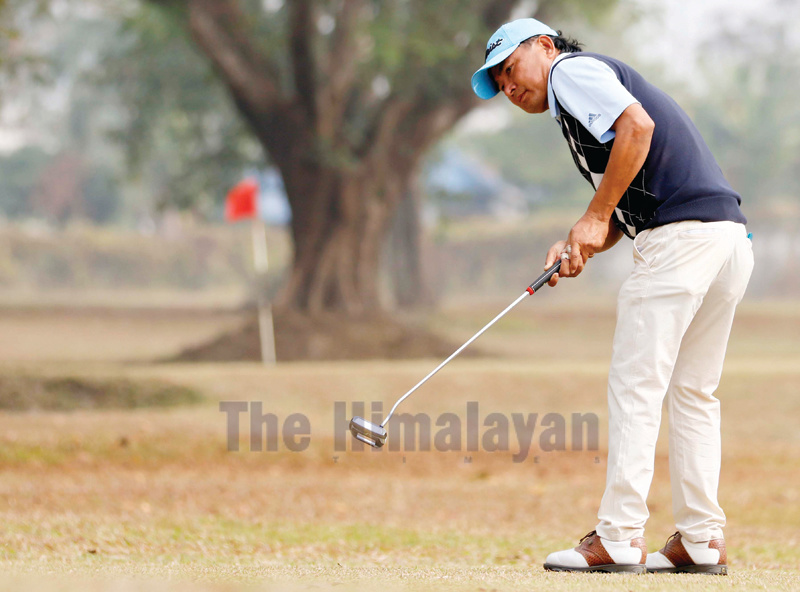 Bal Bhadra Rai making the putt on the 17th green during the second round of the Surya Nepal Eastern Open in Dharan on Wednesday. Photo: THT
Sukra Bahadur Rai completed domination of Dharan golfers at the top after the defending champion carded even-par 70 for the total score of three-under 137. Leader Rai carded three-under 33 on the front nine and shot two-under 32 on the latter half. Rai, who was five-stroke behind amateur Niraj Tamang on the first day, carded a birdie on the second before facing a bogey on the fourth hole. Rai then carded two consecutive birdies on the fifth and sixth holes before adding one more the ninth. On the back nine, Rai saved pars on the first seven holes before producing two wonder putts to sign off with two straight birdies. After sinking a 30-footer birdie putt from the edge of the green on the 17th hole, Rai made it from 10 feet on the final hole. Rai, who had won the Surya Nepal Western Open for his maiden title in 2008- 09 season, led the tournament for the first time in nine years since the Surya Nepal Central Open in 2011. “I had expected of playing two or three-under par today but I was able to return a five-under card. I am extremely happy with my performance,” he added. Amateur Tamang carded even-par 36 on the front nine before playing oneover 35 on the latter half. He went on a birdie-bogey spree on four holes from the second before taking the turn. On the back nine, Tamang carded a birdie on the 12th and faced a bogey on the 18th hole. Defending champion Sukra Bahadur Rai carded even-par 36 on either side of the turn. Rai carded a birdie on the sixth and dropped on the eighth hole, while he faced a bogey on the final hole after carding a birdie on the 16th. Shivaram Shrestha was third among pros and fourth overall at one-over 141 after the former top pro played a round of even-par 70. Shrestha played even-par on both halves. He was two-under for the day after carding birdies on the second and sixth holes but he faced a double bogey on the ninth, where he had an eagle on the first day. On the back nine, Shrestha bounced back with birdies on the final two holes after he had dropped shots on the 14th and 15th holes. Dinesh Prajapati, Shiva Kumar Majhi and Dhana Bahadur Thapa shared the fifth place at four-over 144. Top pro Bhuwan Nagarkoti (70) moved up to share the eighth position with Sanjay Lama (73) at 145, while Jayaram Shrestha (72) and Deepak Magar (74) were tied for 10th at 146. Cut was applied at 13-over 153 and 25 pros and top six amateurs made it to the final round. Bipin Tamang, Binod Tamang, Krishna Man Rajbahak, Pashupati Sharma,Tanka Bahadur Karki, Surya Prasad Sharma, Rabi Khadka, Bhuwan Kumar Rokka, Rame Magar, Deepak Acharya, Deo Raj Pakhrin, Tham Bahadur Rai, Sanjeev Bahadur Nepali, Bhimsen Chaulagain and Sunil KC are the other pros who survived the cut. Ramesh Adhikari, who faltered to 16- over 86 in the second round, failed to qualify. In amateur section, Sundar Rai (74) was a distant second at 147, while Sukra Raj Rai, Yubraj Bhujel, Jiwan Rai and Ritesh Tamang also made the cut. The event carries a purse of Rs 700,000 and top three pros will receive Rs 125,000, Rs 75,000 and Rs 55,000 respectively.
#Surya Nepal Eastern Open #Nirvana Country Club #Bal Bhadra Rai
You May Also like: