Man City and Monaco to gamble on all-out attack 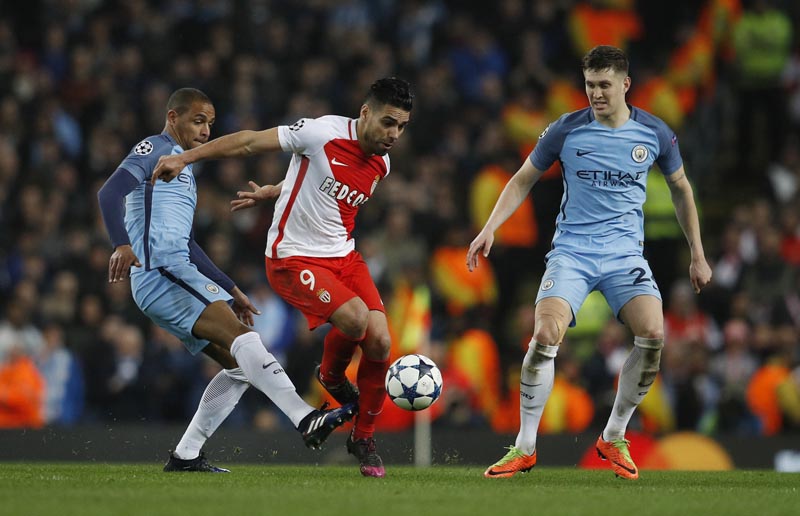 PARIS: Another feast of goals could be in store when Manchester City face Monaco in their Champions League last 16, second leg tie on Wednesday with both managers predicting all-out attack.

City won an astonishing first leg 5-3 at the Etihad Stadium, having trailed 2-1 and 3-2, and will approach the return in a similarly attacking fashion, said manager Pep Guardiola.

"The best way (to defend) is score goals, attack as much as possible," Guardiola told reporters in Monaco on Tuesday.

"When one team scores that many goals and you think about just defending, you kill yourself. The idea is to attack."

Monaco have been a formidable attacking unit this season, scoring 84 goals in 29 Ligue 1 games, and carved City open in the first leg before capitulating late on.

Monaco's Colombia striker Radamel Falcao scored twice in Manchester but there are doubts about his fitness ahead of the return after he suffered a hip injury at the weekend.

"Falcao feels better but I do not know if he is fit to start. We'll see tomorrow," Monaco coach Leonardo Jardim told reporters.

Monaco would progress on away goals with a 2-0 victory but he believes that scoreline is unlikely.

"Given City's collective strength and ability to score, I think we will need to score three goals," he said.

"I don't know. I think that both teams will continue with the same idea in mind. It's difficult to change the mentality of City and Monaco players now."

"I think there will be a lot of goals."

After several disappointments, City made their first major impact in the Champions League last season, reaching the semi-finals under Guardiola's predecessor Manuel Pellegrini.

With Guardiola's track record in the competition, however, the Premier League club want to take the next step.

"I am not here for me I am here for a group of people to do it better. I want to help a new club be stable in Europe," the Spaniard said. "What I want is tomorrow make a good game, I want to be in the quarter-finals, it would be a dream for me."

City defender Bacary Sagna knows he will be in for a busy night on the French Riviera.

"As a defender, it is never pleasing to concede goals. I was upset after the first leg that we conceded three goals. I cannot be happy with that," the former Arsenal player said.

#Manchester City #Monaco #Chanpions League
You May Also like: