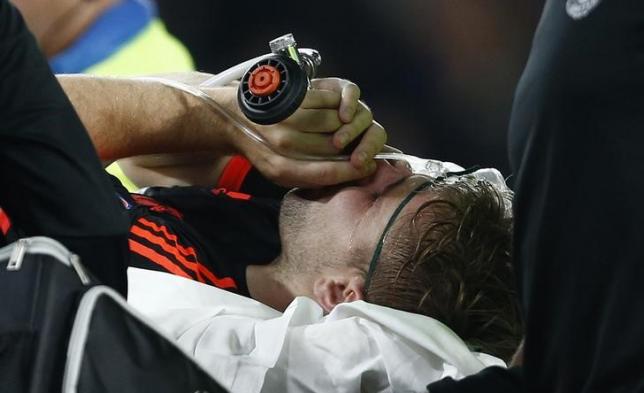 Manchester United's Luke Shaw is set to undergo a second operation on Friday after breaking his right leg in two places in Tuesday's 2-1 loss to PSV Eindhoven, according to British media reports. The England international was carried off on a stretcher with an oxygen mask strapped to his face after he broke tibia and fibula following a challenge by PSV defender Hector Moreno in the 15th minute of the Champions League contest. The 20-year-old had surgery immediately after the match at the St. Anna Hospital in Geldrop and would remain in Eindhoven to continue his recovery, United said on Wednesday. United are reportedly keen to bring the player back to England this weekend should the second operation be successful and he recovers sufficiently. Manager Louis van Gaal said after the match that he expects Shaw to be out for about six months. The former Southampton left back had been in impressive form for club and country after a difficult first year at Old Trafford. He had started all of United's eight games and also featured in England's Euro 2016 qualifiers against San Marino and Switzerland.
#Champions League #Manchester United #Luke Shaw
You May Also like: