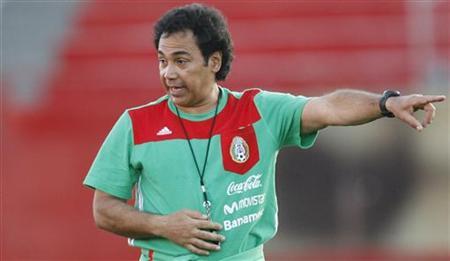 Mexico's soccer coach Hugo Sanchez gives instructions to his players during a practice session at the Caliente stadium in Tijuana City in this file photo from February 26, 2008. REUTERS
Former Mexico and Real Madrid striker Hugo Sanchez has urged his compatriots playing in the Mexican top league to form a union and even go on strike if they continue to go unpaid by clubs in financial strife. Sanchez, speaking at a Real Madrid Foundation event in Mexico City, said he was appalled that players of first division Chiapas and Sinaloa had not been paid by their wages by their clubs for several weeks. "It's inconceivable that soccer players are the only professionals in Mexico who are not treated as such," Sanchez said. "Hopefully the leaders in each team will get together and take a decision, to stop when they have to... but if there is no union it's complicated. "Anywhere else in the world the league would stop. Let's hope an independent footballers' association will become a reality." Chiapas are a lowly 15th in the Liga MX Clausura championship standings with 12 points from 14 matches. Sinaloa, 16th with 11 points, have already been relegated as they are bottom of the relegation table based on teams' points over three seasons with three matches remaining before the top-eight playoffs.
#Mexico #Real Madrid #Hugo Sanchez
You May Also like: