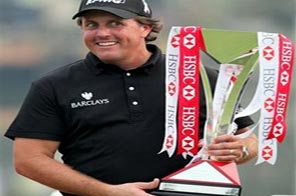 SHANGHAI : Phil Mickelson won the HSBC Champions on Sunday by rallying against a familiar foe.

Only it wasn't Tiger Woods.

Mickelson made an 18-footer to save par on the 16th after whiffing on a flop shot, then holed a 10-foot birdie putt on the 17th to close with a 3-under 69 and overcome a late charge by Ernie Els, who was in the lead until hitting into the water and making bogey on the final hole.

Woods was never a factor in the final World Golf Championship of the year, falling six shots behind on the front nine and doing well to stay on the leaderboard the rest of the way. He hit into the water with his third shot on the par-5 18th and had to scramble for bogey to close with a 72 and tie for sixth, five shots behind.

It was the third time in his last four tries that Woods played in the final group without winning.

Mickelson finished at 17-under 271 and earned $1.2 million in winning his second WGC event of the year. It was the first time he won a tournament while playing in the final group with Woods.

As clutch as Mickelson was down the stretch, Els was the opposite.

The South African, devastated when Mickelson beat him with a birdie on the final hole of the 2004 Masters, was 10 under for his round and had a one-shot lead playing the 538-yard 18th. From the middle of the fairway, he went at the green with a fairway metal and landed in the middle of the lake.

Els had 218 yards to the front of the green on a downslope in the fairway, not enough for him to hit 4-iron, while a 3-iron might go over the green and down the bank into the water. He opted to hit a high cut with his 5-wood and "basically duffed it."

"But I can't think about that," Els said, who started the round seven shots behind. "For me to come back all the way, to actually share the lead at that point, was quite nice. I'm disappointed about that, but I'm going to really think about the 63 I shot."

Els settled for a share of the course record at Sheshan International, a 9-under 63 matched earlier in the day by Rory McIlroy, who finished fourth, and Daisuke Maruyama of Japan.

Els waited in the scoring trailer for Mickelson to finish, and Lefty tried to keep it interesting. He drove into the massive gallery lining the left side of the fairway, then hit into the left rough just short of a bunker. But he hit wedge safely to the middle of the green, and rolled his birdie putt within tap-in range for another victory.

Mickelson won for the fourth time this year, tying a career best.

Ryan Moore, who only qualified for the HSBC Champions by winning his first PGA Tour title in August, closed with a 68 and finished alone in third, which should be enough to move him into the top 50 in the world.

Even with Woods out of the way, Mickelson has a way to keeping it entertaining.

Despite birdies on the 13th and 14th to keep him in the race with Els, it was a par that turned the tournament in his favor.

Mickelson was left of the 288-yard 16th green in short rough, a pot bunker separating him from the flag. Mickelson went for a high flop shot, and was stunned when the club slid through the grass and barely moved the ball.

He tried a bump-and-run that came up short and appeared destined to make bogey. His putt came off the hump of the green, and Mickelson pointed to the cup with his putter as it took one last turn to the left and dropped for par.

"I thought that was one of the best putts I've made in a long time," Mickelson said. "When I made that putt — I didn't know what Ernie was doing on 18 — but I knew I had a chance."

McIlroy's strong finish for fourth place allowed him to move into second place behind Lee Westwood in the Race to Dubai with one only tournament remaining before the Dubai World Championship and the $7.5 million bonus pool.

Woods couldn't wait to get out of China, where he had finished second his previous two trips to the HSBC Champions.

"Anything that could go wrong went wrong for me today," Woods said.

Starting the round two shots behind, and playing in the final group with his chief nemesis for the first time in more than four years, Woods missed a 4-foot birdie putt on the second hole and a 10-foot birdie on the third. He followed that by hitting his tee shot into the water on the fourth for double bogey.

Then came a camera click on his tee shot at the seventh, leading security officials to manhandle one spectator back inside the ropes, and temporarily strip the credentials from a Reuters photographer who they thought had taken the picture early. He eventually was allowed to stay on the job.

Woods was on the verge of shooting 40 on the front nine until making his first birdie, then he followed with two more birdies at Nos. 10 and 11. By then, he simply was too far behind.

"I didn't really envision shooting even par today," Woods said. "I would have had to have shot 67 to get into a playoff. So the guys took it deep, and I didn't."

Mickelson now heads into a long winter's break. Sunday was his final round of the year, and he now takes three months off before starting his 2010 season at Torrey Pines in late January.

#Mickelson rallies to win HSBC Champions
You May Also like: