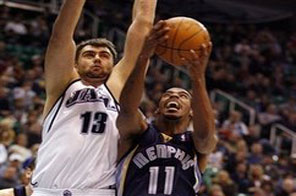 Memphis Grizzlies guard Mike Conley (11) runs into Utah Jazz forward Mehmet Okur (13), of Turkey, as he drives to the basket during the first half of an NBA basketball game Wednesday, Jan. 6, 2010, in Salt Lake City. Source: AFP

Williams sat out with a sprained right wrist, which he sustained when he hit the ground after a driving layup in the fourth quarter of Monday's loss to New Orleans. The Jazz point guard warmed up prior to the game, but was only able to shoot with his left hand. An MRI scan Tuesday was negative and Williams plans to make the trip to Memphis and may play Utah's next game on Friday.

Backup point guard Ronnie Price, who started in Williams' place, scored 14 points and had six assists despite a sore left shoulder. Sundiata Gaines, a recent 10-day contract signee, played his first NBA game and had three points and five assists in 21 minutes as the Jazz won for the first time in four games.

Even without Williams, the Jazz set a season-high with 39 assists and shot 56.8 percent from the field.

Miles broke out of his recent shooting slump with 15 first-half points to lead Utah to a 60-48 advantage at the break. He made 10 of 16 shots, including three 3-pointers, after shooting only 37 percent over the prior five games.

Ronnie Brewer, who had a career-high 10 assists, sparked a 17-6 run midway through the third quarter with back-to-back steals. Price, assisted by Brewer, capped the run with a basket that made it 87-62 for the Jazz with 3:30 left in the period.

O.J. Mayo scored 16 and Rudy Gay scored 11 but the road-weary Grizzlies were consistently late to loose balls and turned the ball over 20 times. The Grizzlies also failed to rotate on the defensive end and gave Utah open looks from the perimeter.

Memphis had won seven of eight games and moved above the .500 mark for the first time since the end of the 2005-06 season but ran out of steam on the final game of a four-game road trip.

Wesley Matthews scored 15 points off the bench and Andrei Kirilenko, who played point at times, added 12 for Utah.

The Jazz have now won 11 straight games over the Grizzlies, the longest streak of any NBA team against Memphis.

Utah's largest margin of victory this season was also against Memphis, 120-93, on November 30.

NOTES: Randolph, who had seven rebounds, failed to extend his franchise record-tying nine double-doubles streak, which dated back to Dec. 16 at Atlanta. ... The Jazz are 2-1 when Williams is absent (he missed two games in November for personal reasons). ... Kyle Korver, who has been rehabilitating from knee surgery, scored for the first time since Dec. 26 against Philadelphia. ... Andrei Kirilenko tied his season high with three blocked shots.

#Miles helps Jazz beat Grizzlies
You May Also like: