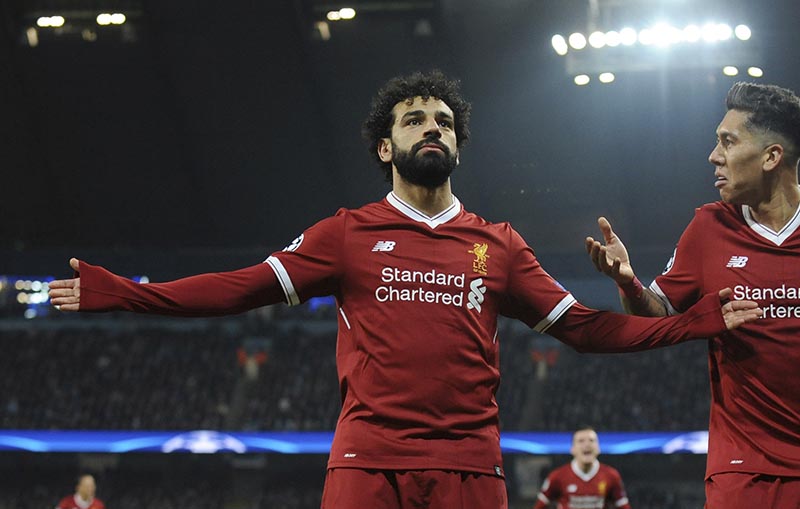 MANCHESTER: After two minutes, the comeback was on.

Manchester City scored the early goal it needed. Just two more for one of the great Champions League fightbacks.

With a typically deft finish, Salah made it 39 goals in a stunning first season at Liverpool and turned a potentially hazardous situation into a stroll at Etihad Stadium for one of the aristocrats of European soccer.

Liverpool weathered a "whirlwind" start from City — as manager Juergen Klopp described it — to win 2-1 in the second leg of their breathless quarterfinal and advance 5-1 on aggregate on Tuesday.

"I really think they are the best team in the world at the moment," Klopp said of City. "But I knew we could beat them. That doesn't make us the better team, but it's football. It's the cool thing in the game, that it's still possible."

City's players gave it everything but were left in a precarious position because of the 3-0 loss in the first leg at Anfield and, crucially, its lack of an away goal.

Gabriel Jesus' goal raised belief inside Etihad Stadium that City could do what only two teams had done before tonight and overturn at least a three-goal first-leg deficit in the Champions League knockout stage.

City hit the post through Bernardo Silva and had a goal by Leroy Sane incorrectly disallowed for offside in the last minutes of the first half.

"At halftime, we said if we scored a goal it would change the atmosphere," Klopp said.

Enter Salah. In the 57th minute, the Egypt forward pounced on a loose ball in City's area after goalkeeper Ederson Moraes saved at the feet of Sadio Mane. Salah skipped round Ederson and showed composure to lift his shot over sprawling City defender Aymeric Laporte near the goal-line.

With City now needing four goals in barely half an hour to advance, Liverpool knew a spot in the last four for the first time in 10 years was there for the taking. Roberto Firmino made sure of it by curling in the team's second goal in the 77th.

"They are a tough team with a top manager," City manager Pep Guardiola said of Liverpool. "I would say they deserve to get in the final."

Surprisingly, Roma joined Liverpool in the semifinals by doing what City couldn't and delivering one of the biggest upsets in the competition's recent history, beating Barcelona 3-0 to advance on the away-goals rule at 4-4.

After goals by Edin Dzeko and Daniele De Rossi, center back Kostas Manolas scored the decisive goal with a header from a corner in the 82nd minute at the Stadio Olimpico.

Real Madrid and Bayern Munich are in good positions to complete the last-four lineup when the quarterfinals are wrapped up on Wednesday. Madrid leads Juve 3-0 and Bayern leads Sevilla 2-1.

It was the latest Champions League failure by Guardiola, who won the competition twice with Barcelona — in 2009 and '11 — but hasn't reached the final since in five season with Bayern Munich and City.

Guardiola spent the second half in the stands after being sent from the dug-out for arguing with referee Antonio Mateu Lahoz during halftime. He was unhappy that Sane's goal, which would have made it 2-0, was ruled out and took his complaints too far.

Over the two legs, City and Guardiola can have few complaints. It's now three losses in a week for City, which was defeated by Manchester United at the weekend to miss out on winning the Premier League title in record time. Questions are being asked about the way Guardiola sets up his sides for big-occasion matches, especially in Europe, and their propensity to collapse.

"You won't find a team who can keep the same momentum over the course of 11 months," Guardiola said. "Maybe in the future, I will realize what the trick is."

Guardiola made his intentions clear by selecting an aggressive 3-1-3-3 formation. All-out attack was the only option for City and the early goal it so craved came when Liverpool defender Virgil van Dijk, under pressure from Raheem Sterling, sent a clearance straight to Fernandinho.

He slid the ball through to Sterling, who squared it for Jesus to stroke in a cool finish from 15 meters.

Liverpool is the top scorer in the Champions League and its quality on the counterattack left City prone to a sucker-punch and Salah applied it.

Liverpool fans' celebrations were already in full swing by the time Firmino pounced on an error by Otamendi to score the winner on the night.

With Barcelona also out, Liverpool has a great chance to win a sixth title in Europe's top competition — and its first since 2005.