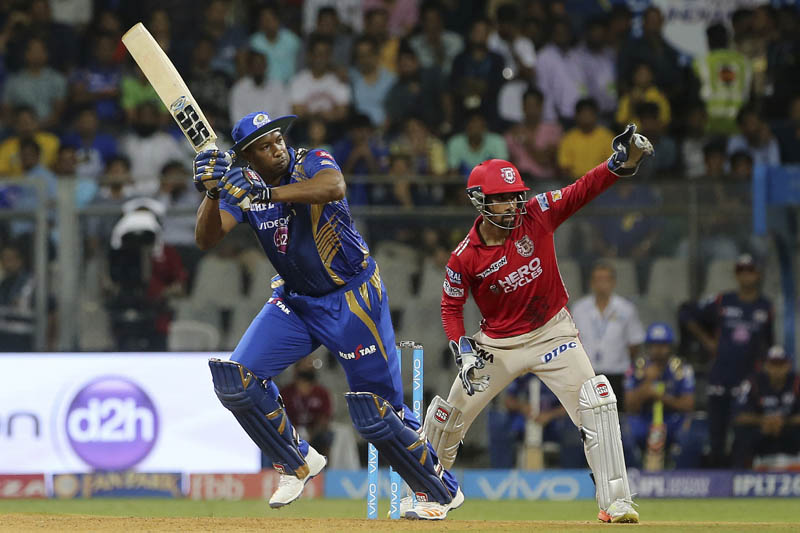 Mumbai Indians player Kieron Pollard plays a shot during their Indian Premier League (IPL) cricket match against Kings XI Punjab in Mumbai, India, Thursday, May 11, 2017. Photo: AP
MUMBAI: Mohit Sharma bowled three terrible overs and four brilliant balls at the death as Kings XI Punjab kept its hopes alive of reaching the Indian Premier League playoffs with a seven-run victory over Mumbai Indians on Thursday. Mohit conceded just one run off the last four deliveries of the match to suddenly restrain Kieron Pollard, who smashed a 24-ball 50 not out, including five sixes. Lendl Simmons top-scored for Mumbai with 59 off 32 before Martin Guptill pulled off a brilliant one-handed catch on the boundary line, leaping backwards to dismiss the opener off Glenn Maxwell. Mumbai finished on 223-6 but it wasn't enough, thanks to Mohit (2-57). The right-arm medium fast bowler conceded 49 runs in his first three overs — 16 in No. 6, 17 in No. 9 and 16 in No. 18 — but held his nerve right at the end. That was despite being hit by Pollard for a six off the second ball, leaving nine runs needed for victory. Earlier, Kings XI was put into bat and scored 230-3 with Wriddhiman Saha 93 not out off 55 balls and Maxwell out for 47. The teams' aggregate runs scored — a total of 453 — was the second highest in IPL history. Mumbai stayed top, with Kings XI fifth.
#India #Indian Premier League #mumbai indians #Mohit Sharma #Kings XI Punjab
You May Also like: