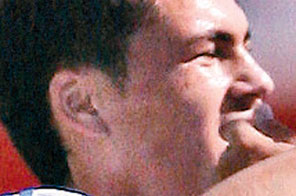 Firdavshii, a player of Tajikistan Source:

KATHMANDU: In suspicion of being over-aged at the AFC Under-16 Championships Group B qualifiers, the Asian Football Confederation (AFC) today performed MRI X-ray tests of five Tajikistan and four Bahrain players.
Muhtojzoda Ibrohimi, Kholiqov Dilshod, Saidov Abdullo, Yusufzoda Firdavsii and Kodirov Buzurgmekhr from Tajikistan were taken for the MRI X-ray test at the MRI Centre in Naxal.
Ibrohimi scored a goal against Bahrain during their 2-0 triumph on the inaugural match of the tournament on Monday. Also, Husain Mohamed, Jasim Mohamed, Mubarak Salem and Sayed Fadhel were the players from Bahrain who were picked by the AFC officials for the tests.
The reports of the X-ray would be sent to the AFC headquarters within a week, said Dr Raju Dongol, the tournament doctor.
“The X-ray of the players’ left hand nerves were taken today to find out their exact age. We will be sending the results of the tests to the AFC within a week along with other team members’ reports,” said Dr Dongol.
The AFC has also planned to perform MRI X-ray of the team members of other participating countries. According to Dr Dangol, the players of Nepal and Lebanon would be medically tested once the latter play their second match of the tournament. Nepal lost to Lebanon 1-0 in their first match on Monday.
Meanwhile, the organisers, All Nepal Football Association (ANFA) said the AFC Competition Committee would
punish the teams if they are found to have fielded over-age player. “The AFC will take the decision after the tournament as per the competition committee report,” said Sanjeev Mishra, media coordinator of the Group B qualifiers tournament that kicked off here at the Dasharath Stadium on Monday.
“The AFC can suspend and fine such teams apart from awarding the match to the opponent,” said Mishra. According to the AFC regulations, the opponent team would get a 3-0 win if any of the two teams is found to have included the over-age player, regardless of the outcome of the match.

#MRI done #decision after tournament
You May Also like: