Mueller, Boateng and Hummels no longer in Loew's Germany plans 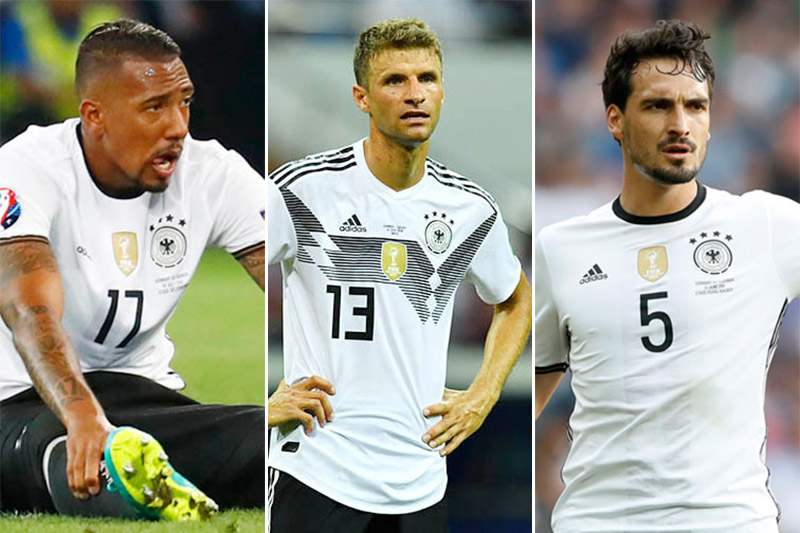 Germany national team players Jerome Boateng (left), Thomas Mueller (centre) and Mats Hummels. Photos: Reuters
BERLIN: Germany coach Joachim Loew is not planning to call up world champions Jerome Boateng, Mats Hummels and Thomas Mueller any longer, saying the team needs to look to the future. The Bayern Munich trio were part of the 2014 World Cup-winning team but the Germans crashed out of the 2018 World Cup in the group stage, their earliest exit in 80 years. All three have also struggled for form this season. "I thank Mats, Jerome and Thomas for the many successful, extraordinary and unique years we shared," Loew said in a statement issued by the German FA. "Now it is time to set the course for the future. We want to give the team a new look," Loew said. "I am convinced that this is the right step. The youngsters coming through will have the room they need to grow. Now it’s up to them to take on responsibility." Loew, who can call on young talent including Julian Brandt, Kai Havertz, Leroy Sane, Niklas Suele and Serge Gnabry, said he had travelled to Munich to inform the three Bayern players. "2019 is a new beginning for the Germany national team," he said. "It was important for me to personally explain my decision to the players and the FC Bayern management." The German coach has been in charge since 2006 and his contract runs to 2022. SAME GENERATION With close to 250 internationals between them, Hummels (70 caps), Mueller (100) and Boateng (74) were part of the same generation. Hummels and Boateng, both 30, played together in the 2009 Under-21 European championship triumph as Germany started to reap the rewards of a major and sustained investment in youth players that had started seven years earlier. They all graduated to the senior team and took part in the 2010 World Cup where Germany's youngest tournament team in 76 years reached the semi-finals with an exciting run that included wins over England and Argentina. Mueller, 29, has scored 10 goals at World Cups, winning the golden boot in 2010. He was the second-top scorer four years later with another five goals. The trio's international cycle was complete when Germany were crowned world champions in 2014, having also clinched an extraordinary 7-1 victory against hosts Brazil in the last four. "I am personally convinced that I can still play at the highest level and will continue to do so," Boateng wrote on Twitter. "I was always extremely proud to wear the national team top ands I will never forget the summer of 2014. But I would have obviously wished for a different departure." Germany team manager Oliver Bierhoff told Bild newspaper: "Thomas, Mats and Jerome have achieved a lot for German football," "They will continue to do so for their club. I continue to feel very connected to them and am thankful for the time we spent together in the national team." Germany play their first international of 2019 on March 20 against Serbia in Wolfsburg.
#Thomas Mueller #Jerome Boateng #Mats Hummels #Joachim Loew
You May Also like: