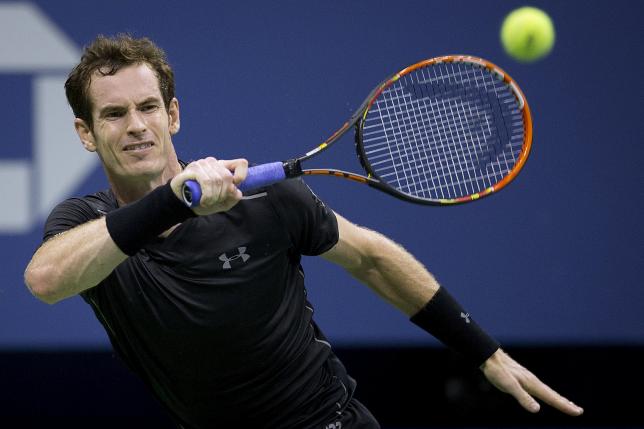 Andy Murray of Britain hits the ball to Nick Kyrgios of Australia during their first round match at the US Open Championships tennis tournament in New York, September 1, 2015. Photo: Reuters
London, September 22 Andy Murray has been told he is “required” to compete in the ATP Tour Finals after the Scot discussed skipping the event to prepare for the Davis Cup final. After helping Great Britain reach a first Davis Cup final in 37 years by beating Australia, Murray suggested he might miss the hard-court ATP Tour Finals to prepare for the Davis Cup showpiece, which is expected to be played on clay. But although the Davis Cup final begins on November 27, just five days after the ATP Tour Finals conclude, ATP president Chris Kermode expects Murray to be present at O2 Arena. “The Barclays ATP World Tour Finals is a mandatory event on the ATP World Tour and all players who qualify, unless injured, are required to compete in the event,” Kermode said in comments quoted by several British newspapers on Tuesday. “He has had a fantastic season and earned his place among the world’s top eight players to compete at the season finale. We are aware of the comments made after the Davis Cup tie in Glasgow, however our expectations are that, if fully fit, Andy would compete in this year’s tournament. “Unless we hear otherwise via an official withdrawal, he is still entered to compete at the O2.” Murray, 28, had told BBC Radio 5 live: “The O2 would obviously be a question mark for me if we were playing on the clay. I would go and train and prepare on the clay to get ready for the final. “For me to play -- if I was to reach the final -- five in a row and then take a couple of days off, it would mean only playing for two days on the clay before the Davis Cup final starts and that wouldn’t be enough for me. “I need more time on the clay to let my back get used to it.” Murray has a history of back problems and revealed after the semi-final win over Australia that he had struggled with a back injury during the tie.
#Andy Murray #Davis Cup final #ATP Tour Finals #Barclays ATP World Tour Finals #ATP World Tour #Glasgow
You May Also like: