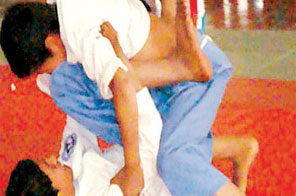 Players in action during the first National Pankration Tournament in Kathmandu on Friday. Source: NSC