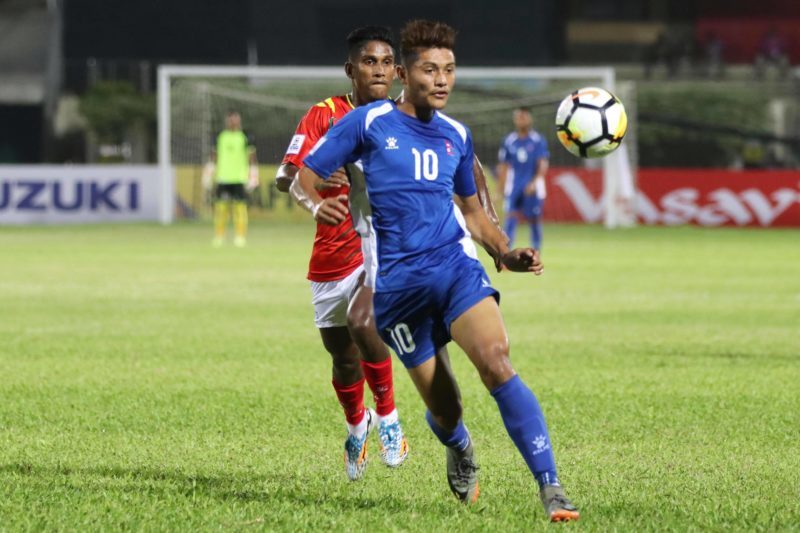 Nepal’s Bimal Gharti Magar (front) beats past a Bangladesh player during their Group A match of the SAFF Championship at the Bangabandhu National Stadium in Dhaka on Saturday, September 8, 2018. Photo: THT
Kathmandu, September 8 Nepal defeated hosts Bangladesh 2-0 in the last group stage match to advance to the semi-finals of the SAFF Championship at the Bangabandhu National Stadium in Dhaka today. Strikers Bimal Gharti Magar and Nawayug Shrestha scored on either half of the match to record their second victory of the tournament and sent the team to the semi-finals for the first time in five years and fourth overall. Nepal had previously made it to the last four in 1999, 2011 and 2013. Nepal finished as the Group A winners with six points, while Pakistan — who hammered Bhutan 3-0 in an early kick off for their second victory — were runners-up on inferior goal difference. Bangladesh, who also accumulated six points, were eliminated along with winless Bhutan. Nepal will now play against Group B runners-up on Wednesday. India are at the top of three-team Group B with three points, while Sri Lanka and Maldives have one each. Nepal had opened the campaign with a 2-1 defeat at the hands of Pakistan and bounced back with a 4-0 victory over Bhutan to keep their semi-final hopes alive. Nepal needed a clear victory, while a draw was enough for Bangladesh to make it to the last four. Acting head coach Bal Gopal Maharjan started skipper Biraj Maharjan and striker Nawayug Shrestha in the bench handing the captain’s arm band to Bharat Khawas. Nepal made bright start creating opportunities but it took them 33 minutes to get off the mark. Bimal Gharti Magar was lucky to find his name in the score sheet after Bangladesh goalkeeper Md Sahidul Alam spilled the free kick ball into the nets. Gharti Magar, who netted his second goal of the tournament and eighth for the national team, charged the post from 35 yards and Alam was nicely placed to save the ball but the custodian let the ball slip from his hands over his head and into the goal in the 33rd minute. Against the run of the play, substitute Nawayug Shrestha doubled the tally in the 90th minute when he collected a brilliant through pass from Bishal Rai at the edge of the area before slamming the ball home that took a deflection into the side post before kissing the nets. Stand-in skipper Bharat Khawas came close to scoring in the 54th minute but he was denied by a superb diving save by goalkeeper Alam and the striker hit off target in rebound after Bangladesh defenders failed to clear the ball properly. In the 80th minute, Gharti Magar found the back of the nets but that was ruled off side. Fed by Nawayug from the right, Sujal Shrestha made an attempt from outside the box but Gharti Magar made the last touch from offside position. Coach Kiran Shrestha lauded his players for collective efforts. “The first goal was the turning point of the match as we got the goal because of the mistake of Bangladesh goalkeeper,” he said. “We were under pressure and in must-win situation after Pakistan’s victory over Bhutan. They boys put in their hard efforts.”
#Dhaka #Kathmandu #football #SAFF Championship #Bangabandhu National Stadium
You May Also like: