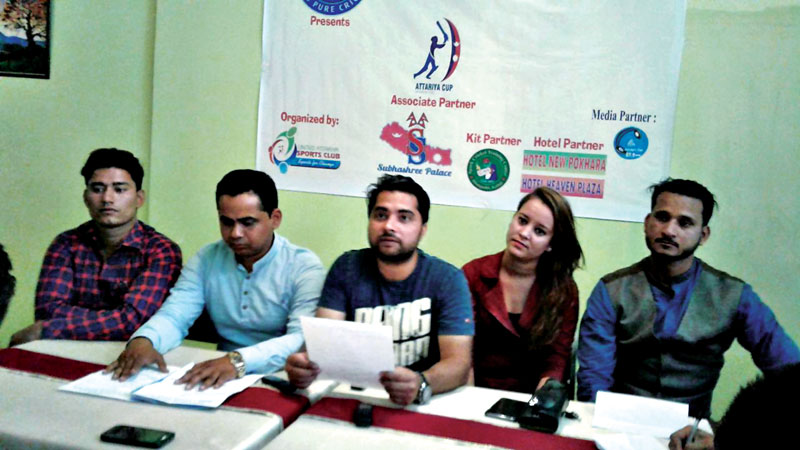 United Attariya Sports Club President Ravi Khanal(centre) speaks at a press meet in Kailali on Monday.
Attariya (Kailali), May 1 Nepal APF Club will face Milan Cricket Academy of Jhapa in the opening match of the Attariya Cup Women’s Cricket Tournament on Thursday. A total of six teams will take part in the first-ever women’s Twenty20 league tournament organised by United Attariya Sports Club under the sponsorship of Ruslan. As per the draw and schedules release today, Nepal APF Club, Milan Cricket Academy and Kanchanpur Women’s Team are in Group A, while Kailali District Cricket Academy, Rising Cricket Women of Kathmandu and Bara Cricket Academy are in Pool B. Top two sides from both the groups after the league round will make it to the semi-finals. All the matches will be played at the APF grounds in Attariya and the preparations for the highest cash prize tournament was almost over, informed the organisers at a press meet today. “We have completed the preparation works at the ground and we are almost ready to host the tournament,” said United Attariya Sports Club President Ravi Khanal. “Women cricketers do not get enough opportunities as there are very few tournaments for them in the country. We are organising this event to promote women cricketers from grassroots level and help in the overall development of the sport,” Khanal added. The winners and runners-up of the competition will get Rs 200,000 and Rs 100,000 respectively, while the best player will take home Rs 25,000. Likewise, the best batter, bowler and wicketkeeper of the tournament will receive Rs 10,000 apiece. Similarly, the player-of-the-match will earn Rs 3,000.
#Nepal APF Club #Jhapa #Twenty20 cricket #United Attariya Sports Club #Milan Cricket Academy #Attariya Cup Women's Cricket Tournament #Twenty20 league tournament
You May Also like: