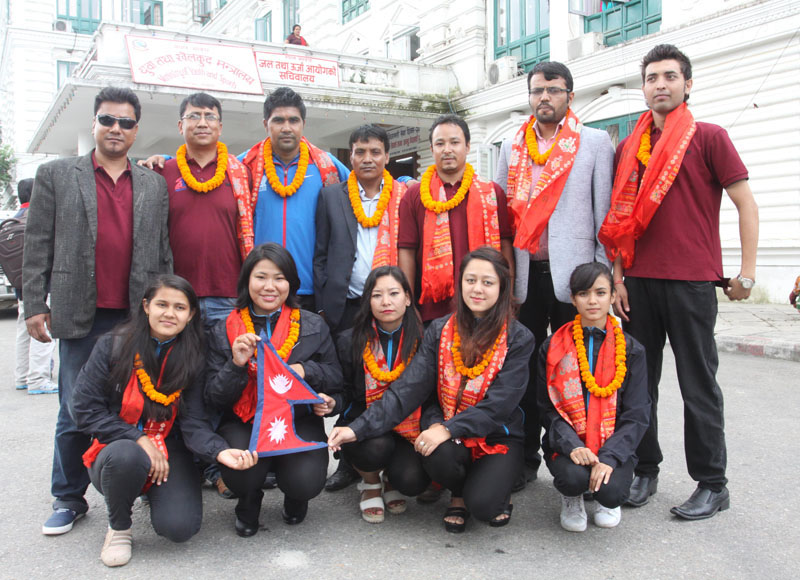 Nepali chess players and officials pose for a group photo after a farewell programme at the Ministry of Youth and Sports in Singhadurbar, Kathmandu on Tuesday, August 30, 2016. Photo: THT
Kathmandu, August 30 Nepali chess team is set to participate in the 42nd Chess Olympiad but without having adequate training for the international meet in Azerbaijan this week. A total of 10 players, five each in men and women categories, are on Wednesday leaving for Baku to participate in the Olympics of their sport slated for September 1-14 in Baku. FIDE Master Bimal Lal Shrestha, Candidate Masters Bhupendra Niraula and Keshab Shrestha along with Sajin Maharjan and Chhitiz Bhandari are the men’s players, while WCM Monalisha Khamboo, Sindira Joshi, Shanta Thapa, Sujata Lohani and Ashmita Adhikari are the women players who will represent Nepal in the Olympiad. The players have set the target of winning medals in Baku despite having proper training back home. CM Keshab Shrestha said the players did not get enough training for the Olympiad. “We have prepared for the tournament on our own and went to various chess clubs to play matches for training,” said Shrestha. “We were not provided with the closed camp session this time around.” He also said that Nepal could have claimed the team event medal had the players were provided with proper training. “The association neither organised any tournament after the selection nor it held the camp for training,” Shrestha added. This is the sixth time Nepal are participating in the Chess Olympiad since making debut in 2004 and second tournament for women chess players. Nepal’s achievements in the Olympiad so far are the FM titles earned by Manish Hamal and Bimal Lal Shrestha and CM title earned by Prachanda Man Malakar. In women’s maiden appearance in the previous edition in Norway, Suruchi Thing earned the title of Women Candidate Master. Khamboo said the women players were targeting to win team event medal to prove their worth. “Women chess players are taken lightly compared to our male counterparts,” she said. “We proved that wrong in our first outing and we are determined to give our best and show that women players are also strong in the sport,” said Khamboo. Apart from the 10 players, nine officials will also travel to Baku. President of FIDE Zone 3.2 Rajesh Hari Joshi, Nepal Chess Association President Ekalal Shrestha, Senior Vice-president Bidur Prasad Gautam (Arbiter), Vice-president Madhav Prasad Pradhan (women’s team captain) and General Secretary Herakaji Maharjan (men’s team captain) will accompany the players to Baku. Similarly, NCA Secretary Dharam Bahadur Lama, Member Umesh KC and advisors Subodh Raj Sherpali and Manindra Raj Ranjitkar will participate in the FIDE Seminar for International Organisers. Minister for Youth and Sports Daljit Sripali bade farewell to the team.
#Azerbaijan #‘We Nepalis #Nepali chess team #Chess Olympiad #Nepal chess team
You May Also like: