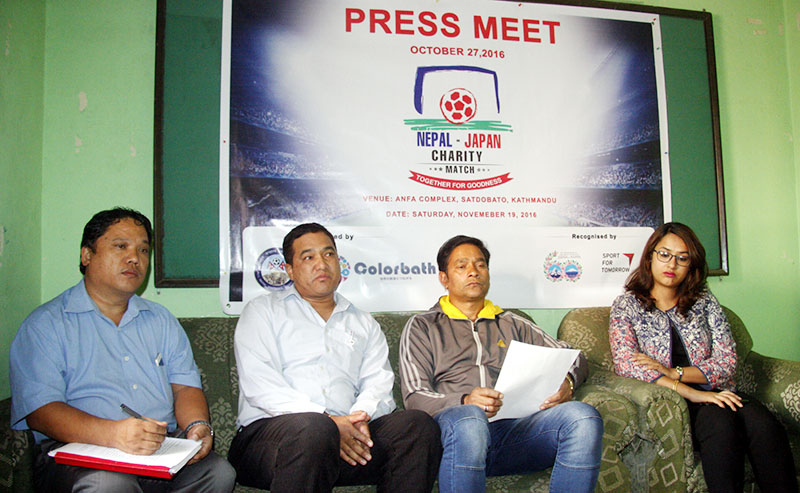 Officials of All Nepal Football Association and Colorbath Nepal during a press conference at the Nepal Sports Journalists Forum in Kathmandu on Thursday, October 27, 2016. Photo: THT
Kathmandu, October 27 Nepal national football team will play against Japan Friends in the charity match at the ANFA Complex grounds on November 19. The match, jointly organised by All Nepal Football Association and Colorbath Nepal, a Japanese NGO working for the promotion of football to mark the 60th anniversary of friendship between Nepal and Japan, has been recognised by the Sport For Tomorrow under the Foreign and Education ministries of Japan, informed the organisers at a press meet today. Development Director at ANFA Sanjeev Mishra and Colorbath Nepal’s Ichhya Lamichhane were also present on the occasion. The Japanese team, led by the member of the 2002 FIFA World Cup squad Kazuyuki Toda, will arrive here on November 17 for a four-day tour. Apart from the one-off friendly match, the team will train the kids of the JICA-built schools in Kavre and visit the world heritage sites damaged by last year’s devastating earthquake, informed ANFA CEO Indra Man Tuladhar. The organisers have aimed at raising eight million rupees from the charity match which will be used in the development of football in earthquake-affected districts and reconstruction of education sectors. “Colorbath is  an organization which has been organizing various programmes in sports, especially football. So we will spend the money in the development of football,” said President of Colorbath Nepal Ganesh Man Lama. “Apart from ticket sales, we also have some sponsors from Japan for the match.” The organisers have set the price of Rs 1,500 and Rs 1,000 for the match. ANFA CEO Tuladhar said they were in talks with Colorbath Nepal for the last 14 months for the match. “The National Sports Council had assured us of providing the Dasharath Stadium after Deepawali and we finalised the charity match. But the NSC gave us the permission of using the pitch only. We then went to Pokhara to assess the stadium but the Japanese side rejected that citing security reasons as the stadium there is open,” said Tuladhar. “We were forced to play the match at the ANFA Complex grounds but we are building portable parapet and we are hoping to have around 5,000 spectators,” he added. Tuladhar also urged the government to complete the construction of the Dasharath Stadium at the earliest. “We do not have alternate venue and without the stadium we cannot run football activities,” he said. “The government had allocated budget for the Chyasal Stadium and the ANFA was supposed to lay astro-turf under FIFA project. But the government has taken the responsibility saying it would construct the stadium under the South Asian Games project,” he added. Japan Friends: Kazuyuki Toda, Hiroki Ohkawara, Masato Mochizuki, Yohei Iwasaki, Takeo Ogawa, Ryotaro Nakano, Yudai Imura, Yosuke Saito, Masahiro Fukasawa, Yohsuke Nozawa, Atsushi Shirota, Ryoh Kurihara, Tatsuro Inui, Kazuo Homma, Shori Murata, Itsuki Yamada
#All Nepal Football Association #Charity match #ANFA Complex #Nepal national football team #Japan Friends #Colorbath Nepal
You May Also like: