Nepal U-16 team settles for draw against India 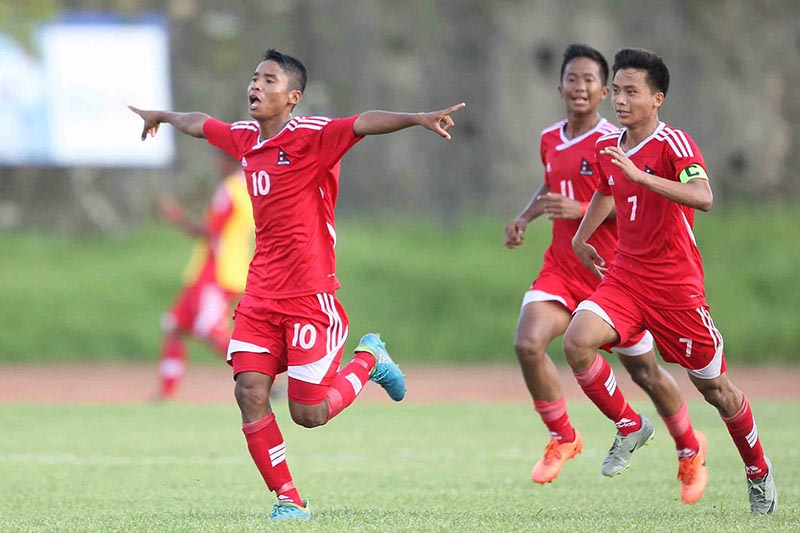 Nepal’s chances of qualifying for the AFC U-16 Championship faced a blow as they were held to a 2-2 draw by India here at the Nepal APF Club grounds today.

Nepal, who faced a 1-0 defeat against Iraq in their opening match of Group D on Wednesday, had to settle for the draw despite taking lead. Birjesh Chaudhary scored a brace for Nepal, while substitute Harpreet scored both the goals for India, who had defeated Palestine 3-0 in their first match.

After a goalless first half, the two teams scored four goals in the space of 14 minutes. Chaudhary put Nepal ahead in the 76th minute when he slammed home from the edge of the box following a cross from Deepak Bhandara.

However, Harpreet, who replaced Lalchhanhima Sailo in the 78th minute, levelled the scores in the 83rd minute. Harpreet’s shot from nearly 40 yards kissed the back of the nets leaving Nepali custodian Bishal Sunar, who was not in his proper position, stranded.

India went ahead three minutes later as Harpreet scored his second goal in the 85th minute from the box with a simple tap-in following a cross from Lalrokima. At a time when the match was heading towards the end, the home team produced the equaliser. Striker Chaudhary found scored into the top corner of the post that left India goalkeeper Lalbiakhlua Jongte hapless.

Nepal head coach Sunil Kumar Shrestha said the match turned away from Nepal’s hand after the team conceded the equaliser. “Our boys are improving day by day but are not able to produce victories. In today’s match, we were in the lead but the goal that we conceded from nearly 40 yards changed the complexion.  India could score the goal as our goalkeeper Bishal Sunar was not in his position,” said Shrestha.

India’s head coach Bibiano Fernandes said his team put in their best efforts to win the match. “We had to settle for a draw after Birjesh Chaudhary scored a world-class goal to level the match. We knew it would not be easy against Nepal. We tried our best and missed lot of chances whereas Nepal played excellent football,” said Fernandes. “After conceding a goal, we bounced back to score two goals. But Nepal came up with a world-class goal and we could not do anything,” said Fernandes.

Earlier, Iraq thrashed Palestine 4-0 on goals from Hasan Salman Shanan, Abdul Razzaq Qasim, Ashmed Aryad Al Hilfi and Abdullah Hassoon Hamee. With the second straight victory, Iraq are at the top with six points, while India (four) are second followed by Nepal (one). Palestine are yet to open their accounts. Group winners of all the 10 pools and five best runners-up will advance to the finals to be held in Malaysia next year.