Nice recover from 2-0 down to earn draw at Rennes 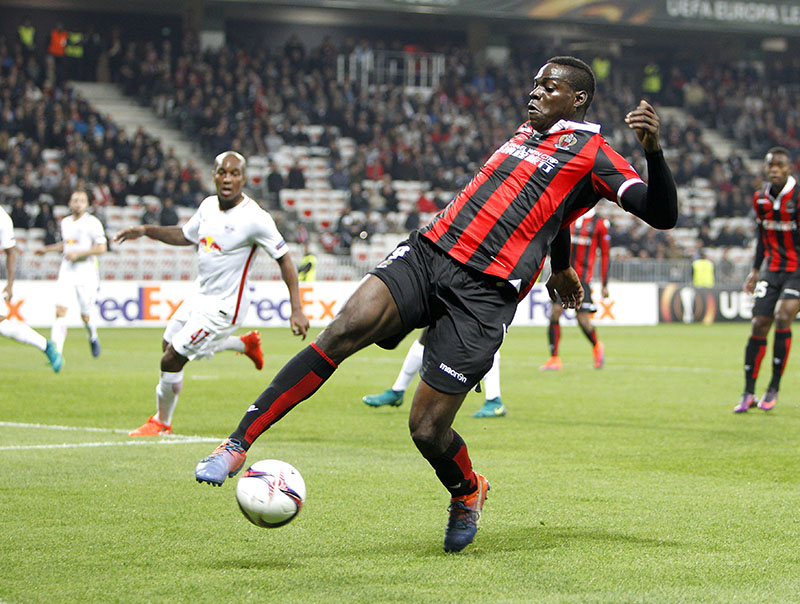 FILE - Nice's Mario Balotelli controls the ball during the Europa League group I soccer match between OGC Nice and FC Salzburg, at the Nice stadium, southeastern France, on Thursday, November 3, 2016. Photo: AP
PARIS: With its two best strikers off the field, Nice hit back from 2-0 down with second-half goals to force a 2-2 draw at Rennes in the French league on Sunday. Nice was already without star striker Mario Balotelli, who was rested for the game because of a fever, and coach Lucien Favre faced another reshuffle when top scorer Alassane Plea had to go off close to halftime. At this point, Nice was already trailing to early goals from winger Morgan Amalfitano and striker Giovanni Sio. But Greek forward Anastasios Donis, who is on loan from Italian champion Juventus, pulled a goal back in the 59th minute with his first goal for the club after being set up by attacking midfielder Valentin Eysseric. Then, with 10 minutes left, Eysseric equalised when he ran onto a long pass from midfielder Jean Michael Seri and tucked the ball past goalkeeper Benoit Costil. The draw leaves Nice two points behind second-placed Paris Saint-Germain and five adrift of leader Monaco. But Nice remains in the driving seat to finish in the top three and earn a place in the qualifying round of next season's Champions League. Favre said Rennes put his team under pressure early on by closing down so well but was proud to see his players fighting back strongly. "I think it's a good point to take. They squeezed us like lemons," he said. "We told each other at halftime that it's never over at 2-0 down. We came back and that's very good, but we can't start too many games like we did today." Nantes 3, Marseille 2 This encounter was once among the biggest draws in French football, but both sides are chasing the shadow of past glory. Nantes, which went 32 league games unbeaten during the 1994-95 season, won the last of eight league titles 16 years ago. Marseille has nine league titles and is also the only French club to have won the Champions League — beating AC Milan 1-0 in 1993. However, the southern seaport club last won the league in 2010 — and that was its first since 1992. Both clubs now lag behind Paris Saint-Germain, Monaco, Lyon and Nice. Still, fans at Stade de la Beaujoire got full value for money on a chilly Sunday night close to France's Atlantic coast. Goals from Brazilian defender Diego Carols and Polish striker Mariusz Stepinski put the home side 2-0 up after 20 minutes. Marseille striker Bafetimbi Gomis pulled one back shortly after halftime. Midfielder Adrien Thomasson quickly made it 3-1 before Gomis scored again in the 61st. The win moved Nantes closer to mid-table, while Marseille remains in sixth place as it chases a Europa League spot. Whether Marseille achieves that rests largely with the 31-year-old Gomis, who returned to Ligue 1 after two inconsistent seasons in the Premier League with Swansea. Gomis has already equaled his career best with 16 league goals this season. The powerful and combative Gomis, who has 12 caps for France, had spells with Saint-Etienne and Lyon and totals 118 goals in France's top flight. Saint-Etienne 4, Lorient 0 Saint-Etienne warmed up perfectly for its trip to play Manchester United in the Europa League on Thursday. Center back Loic Perrin and midfielder Jordan Veretout made it 2-0 after 20 minutes, with winger Romain Hamouma and striker Jorginho scoring after the break. The win moved Saint-Etienne to within one point of fourth-placed Lyon in the race for a Europa League spot next season, although Lyon has played one game less. Lorient remains bottom.
#RENNES #French league #Nice #French Roundup
You May Also like: