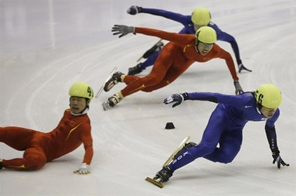 BEIJING: China's sports ministry has decided not to submit bids by the northeastern cities of Harbin and Changchun to host the 2018 Winter Olympics, despite initial support, state media said Wednesday.

The two cities had earlier expressed strong interest in bidding to host the Games, but formal bids will not be made to the International Olympic Committee by the Thursday deadline, the Beijing Legal Evening News said.

"The decision was made by the General Administration of Sports," the paper quoted Harbin's top sports official, Gong Xiqing, as saying.

Gong said the decision was made because a bid from South Korea's Pyeongchang was seen as stronger.

As for Changchun, the paper quoted its top sports official, Guo Zhongjun, as saying: "The General Administration of Sports did not agree to our bid after considering it."

Officials at the sports ministry were unavailable for comment. Officials contacted at the sports bureaus of Harbin and Changchun said they were unaware the ministry had turned down their bids.

"Whether to bid for the Winter Olympics firstly depends on the enthusiasm of the potential host cities. If they are really enthusiastic to bid, we will certainly support them."

So far, the German city of Munich, which staged the 1972 Summer Olympics, Pyeongchang and the French town of Annecy have announced their intention to bid for the 2018 Winter Olympics.

The 2010 Games are being held in Vancouver, while the 2014 Winter Olympics will be held in the Russian resort city of Sochi.