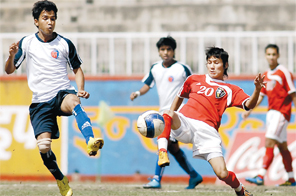 Ranjit Shrestha (second from right) of New Road Team vies for the ball with a Friends Club player during their Martyrs Memorial San Miguel A Division League match at the Dasharath Stadium on Thursday. Source: THT

KATHMANDU: Nepal Police Club (NPC) missed a chance to go one point ahead of leaders New Road Team (NRT) at the top of Martyrs Memorial San Miguel A Division League as the departmental team played a drab 1-1 draw with Tribhuvan Army Club (TAC) here at the Dasharath Stadium today.

After seeing NRT struggle for a 2-2 draw against NIBL Friends Club earlier in the day, the Policeman had a wonderful chance to move ahead of NRT with a win against the Armymen. In fact both the teams rallied to salvage a point each. With the completion of the first leg, NRT lead the table with 24 points, one ahead of NPC. Three Star are third with 21 points while Friends move one spot up to fourth with19. MMC slipped to fifth with 18 points. The Army stayed on sixth with 16 points.

After the lacklustre first half, the Armymen took the lead in the 55th minute, Amrit Basnet slotting home a long pass from Bhoj Raj Ghimire. Their lead, however, lasted only for three minutes and national team forward Ju Manu Rai equalised with a powerful shot from the left flank which left TAC glovesman Bikash Malla hardly any time to react.

NPC coach Birat Krishna Shrestha said they would have won the match easily had his boys played the way they did after conceding a goal. “They played their natural game only after trailing by a goal,” added the NPC coach. His TAC counterpart Raju Kaji Shrestha was happy to have shared the points. “Inability to hold the flow of the game after taking the lead has long been our team’s problem. That is what happened today as well,” added the former national team skipper.

Earlier in the first match, Friends stunned NRT with two second half goals inside three minutes. Buddha Chemjong scored a superb shot into the far post from the right flank in the 72nd to leave NRT custodain Surendra Shrestha stranded in the goalline. And three minutes later Pukar Gahatraj headed home a cross from Azad Pradhan to double their lead.

However, in the frantic last eight minutes of the match, NRT struck twice to ensure they begin the second leg next week as leaders.

NRT forward Shayan Mosavi headed in a pass from midfielder Jivan Sinkeman four minutes from time to make it 2-1. The match was heading Friends way until the fourth minute of the added-on time when Ranjit Shrestha headed home a Rakesh Lama cross to complete a remarkable comeback.

Friends coach Mrigendra Mishra was furious with referee Bikash Mahat after conceding a last gasp equaliser. “It’s riduculous that he (Mahat) continued the play even after the end of the four-minute of added-on time. We conceded the equaliser 30 seconds after the end of the four minutes of the injury time,” added Mishra. NRT coach Diken Suwal accepted there was a huge pressure on them to stay at the top. “Unfortunately our boys could not come up with their best,” said Suwal.

#NPC fail to capitalise on NRT slip
You May Also like: