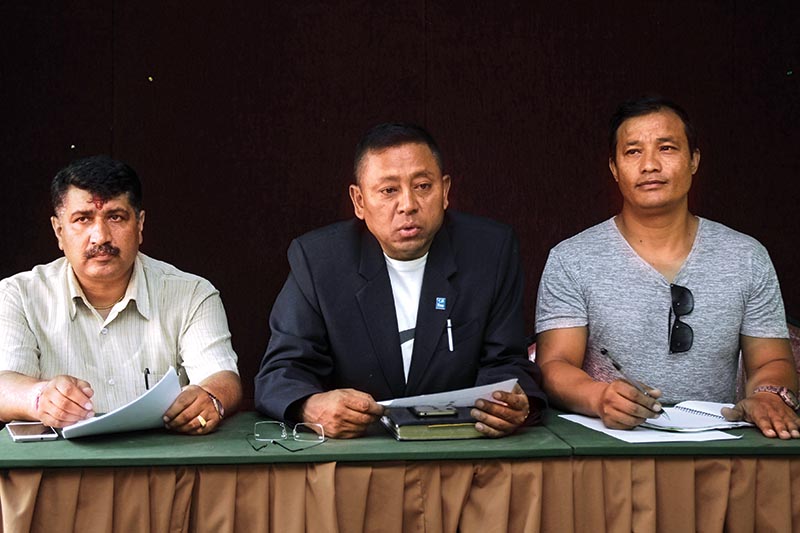 Nepal Swimming Association General Secretary Jagat Man Shrestha (left) speaks as Vice-president Mahesh Maharjan looks on during a press meet in Kathmandu on Sunday.Photo: THT
Kathmandu, September 17 Nepal Swimming Association is set to organise the seventh NSA Cup Swimming Championship at the International Sports Complex pool on Monday and Tuesday. Since the NSA does not have heating-system swimming pool, the event would be the last one of the season, informed NSA General Secretary Jagat Man Shrestha at a press meet today. A total of 184 swimmers — including 112 men and 72 women — from four clubs and 35 schools are taking part in the championship which features 26 events in open and 33 in age group. Shrestha also informed that swimmers breaking national records will be awarded with Rs 5,000 for each event. Out of the total budget of Rs 476,000, National Sports Council will provide the NSA with 250,000. NSA Vice-president and tournament coordinator Mahesh Maharjan said the support from corporate sector was a must for development of sports. “We are planning to seek support from business houses and most probably we will have sponsors from next season,” he added. Meanwhile, Shrestha informed that swimmers Sirish Gurung and Niharika Tuladhar are set to compete in the fifth Asian Indoor and Martial Arts Games being organised in Ashgabat, Turkmenistan. Gurung will take part in 50m freestyle and 100m breaststroke, while Tuladhar will compete in 50m and 100m breaststroke events.
#Turkmenistan #Nepal Swimming Association #International Sports Complex pool #Ashgabat #NSA Cup Swimming Championship #Asian Indoor and Martial Arts Games
You May Also like: