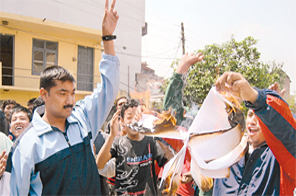 KATHMANDU: A group of people led by the Nepal Taekwondo Association (NTA) Agitation Committee vandalised the Youth and Sports Ministry here today.
The agitators had gathered at the ministry to exert pressure after their demands were unheard of. The probe commitee, formed by the ministry to find truth behind Nepal's inability to compete in the first Youth Olmpics Games, had failed to address their demands.
Youth and Sports Minister Ganesh Nepali, who showed up at his office almost two and half hours after the incident, assured the agitators of a four party dialogue — ministry, National Olympic Committee (NOC), NTA and the National Sports Council (NSC) — on Monday.
"I assure you of addressing the problem after a joint dialogue with NSC, NTA and NOC on Monday. If the dialogue help identify the culprits behind the taekwondo team's inability to participate at the Singapore Games, we will do everything in our capacity to punish them," said minister Nepali.
The agitators vandalised the office of the Joint-secretary Rana Bahadur Shrestha — coordinator of the probe committee formed by the ministry — after breaking the ministry stairs and name-board when there were no ministry officials and security personnel at the scene. They also reminded minister Nepali of serious consequences if the ministry fails to give headway to the matter on Tuesday.
The Nepali taekwondo team was deprived of participating in the qualifying tournament in Mexico held from March 3-9 due to the unavailability of fund. With that they are also set to miss the Youth Olympic Games scheduled for August 14-26 in Singapore. The NTA had met minister Nepali on March 2 demanding the probe into the matter.
Disappointed for not being able to send the players to the qualifiers, the NTA had also demanded the ministry to bar Nepali contingent from competing at the Singapore Games. The ministry in return directed joint-secretary Rana Bahadur Shrestha on March 4 to probe into the matter and submit the findings of the truth within five days of his investigation.