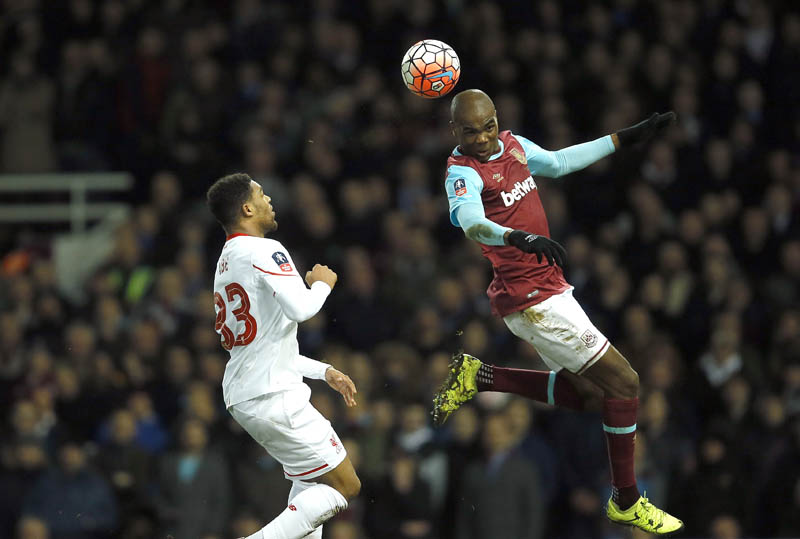 West Ham's Angelo Ogbonna (right) vies for the ball with Liverpools Jordan Ibe during their FA Cup match at Boleyn Ground Stadium, in London, on Tuesday. Photo: AFP
London, February 10 Angelo Ogbonna headed home in stoppage time of extra time as West Ham United stunned a youthful Liverpool team 2-1 in Tuesday’s FA Cup fourth-round replay at Upton Park. Philippe Coutinho’s clever free-kick had cancelled out Michail Antonio’s volleyed opener for West Ham and the game was seconds from a penalty shootout when Dimitri Payet curled a free-kick into the visitors’ box from the right and Ogbonna rose at the back post to head in the winner. It was his first goal since signing from Juventus and it earned Slaven Bilic’s side a trip to Blackburn Rovers in the fifth round. West Ham had never previously beaten Liverpool in the FA Cup, but they have now overcome them three times this season, having beaten them twice in the league prior to the 0-0 draw in their first FA Cup encounter. Back in the dug-out after having his appendix removed on Saturday, Liverpool manager Jurgen Klopp watched his young charges push West Ham all the way until falling at the very last hurdle. “It’s hard,” Klopp told BT Sport. “We were the better team, created chances and played good football, but we didn’t use them.” Despite Klopp making 10 changes and entrusting the midfield to 18-year-old Pedro Chirivella and the callow pair of Kevin Stewart and Joao Carlos Teixeira, Liverpool made an assured start. The first chance was theirs, Christian Benteke’s volley scrambled behind by Darren Randolph from Coutinho’s deep corner, but West Ham were quick to respond, right-back Joey O’Brien almost crowning his first start since July by slamming a shot against the post. The pace was sedentary but the game was open and the woodwork was rattled again at both ends before the hosts took the lead in first-half injury time. Enner Valencia wriggled his way to the byline on the left and dug out a cross to the back post, where Antonio leapt to meet it with a crisp side-foot volley that flashed past Simon Mignolet. Klopp sent his side out early for the second half and within four minutes they were level, Coutinho deviously stroking a 20-yard free-kick beneath the wall and in after Pedro Obiang was deemed to have fouled Benteke. Klopp sent for fit-again strikers Daniel Sturridge and Divock Origi, while injuries to Winston Reid and Cheikhou Kouyate obliged Bilic to bring on James Collins and Andy Carroll, the former Liverpool striker. Valencia appealed in vain for a penalty when Tiago Ilori appeared to tug him back as he attempted to convert Antonio’s low cross. The teams continued to exchange chances — Randolph parrying from Benteke and Sturridge and Valencia heading over — but they could not be separated in normal time.
#West Ham United #Liverpool #FA Cup #Angelo Ogbonna #Upton Park
You May Also like: