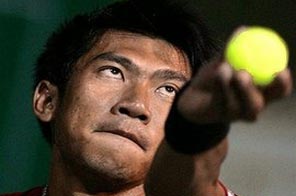 Thai star Paradorn Srichaphan, seen here in 2007, is targetting a return to the ATP Tour after making his comeback from two and a half years out through injury with a doubles defeat at the Thailand Open here on Wednesday. Source: AFP

BANGKOK: Thai star Paradorn Srichaphan is targetting a return to the ATP Tour after making his comeback from two and a half years out through injury with a doubles defeat at the Thailand Open here on Wednesday.

The Asian ace, who stood ninth in the world six years ago, went down in the first round with Davis Cup team-mate Danai Udomchoke as the home pair lost to German Michael Kohlmann and Alexander Peya of Austria, 2-6, 6-1, 10-6 (match tiebreak).

"I would have loved to have come back in the singles," admitted the 30-year-old Paradorn, who single-handedly sparked tennis interest in Thailand a decade ago.

"But I knew physically I was not ready. I've only been a able to train with the racket for the past two weeks."

The match was the first of any kind on the ATP Tour for Paradorn, bothered by wrist problems which have required two bouts of surgery; one in Los Angeles, the other in Bangkok.

He last played at Indian Wells in March 2007.

Despite the loss at the Impact Arena, the winner of five career titles - the last in 2004 - said he was pleased with his initial efforts.

"I hit the ball OK, of course there is still a lot of work to go. I want to return to the ATP, I think I still have the ability.

"But I have to look after my wrist and cannot make a strict timetable. I'm hoping to play from January, maybe in Chennai, India."

Seven months after his second wrist operation, Paradorn said that doctors will not be able to tell him if he is able to continue his career until the end of the year.

"I need to train for more days from now on, but I don't want to do a lot of travelling," said Paradorn, who is married to Russian former Miss Universe Natalie Glebova. "I have a wife now and tennis is not everything.

"At the end of the year I should know a lot more about my future."

#Paradorn optimistic after injury absence
You May Also like: