By Reuters
REIMS: Two penalties were enough to book Norway's ticket to the last 16 at the women's World Cup after an uninspiring 2-1 win against a feisty South Korea team that restored some pride after losing their first two games. Barcelona-bound Caroline Graham Hansen slotted home a penalty in the fourth minute after South Korea captain Cho Sohyun tugged defender Maria Thorisdottir's shirt. 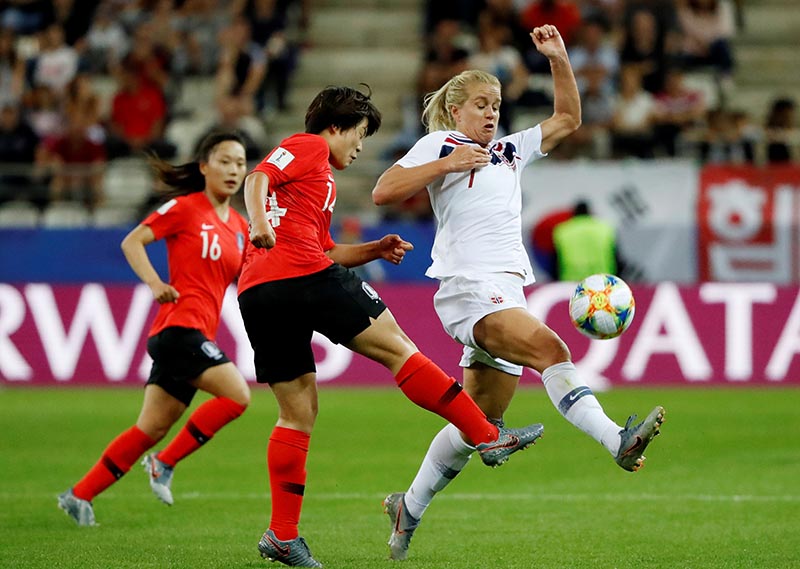 Korea Republic's Shin Damyeong shoots at goal as Norway's Elise Thorsnes attempts to block during the Women's World Cup Group A match between Korea Republic and Norway, at Stade Auguste-Delaune, in Reims, France, on June 17, 2019. Photo: Reuters
Hansen was brought down early in the second-half with forward Isabell Herlovsen converting from the spot in the 50th minute to double Norway's lead. Yeo Minji pull one back for the Koreans in the 78th minute after Lee Geummin's magical backheeled through ball but despite some late pressure they could not level. Norway join hosts France in the last 16 and will face either Italy, Brazil or Australia, while Korea finished with no points.
#South Korea #Women's World Cup #Norway
You May Also like: