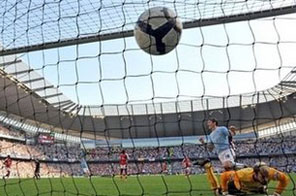 Manchester City score a goal during the English Premier League match against Arsenal at The City of Manchester Stadium in September. England's troubled bid to stage the 2018 World Cup received a boost when the Premier League announced a host of measures to revive the spluttering campaign. Source: AFP/File/Andrew Yates

LONDON: England's troubled bid to stage the 2018 World Cup received a boost on Friday when the Premier League announced a host of measures to revive the spluttering campaign.
English 2018 chiefs have been forced to restructure their board after a month of turmoil sparked by criticism by FIFA vice-president Jack Warner, who described the English bid as "lightweight", and rows over reduced government funding.
Bid chairman Lord Triesman has also come under fire for reportedly allocating just two days a week for World Cup activities.
But Premier League bosses are keen to get the bid back on track as hosting a World Cup would have substantial benefits for their clubs.
The bid will be promoted via perimeter boards at the 20 English top-flight clubs, in club publications and websites, and will be promoted by Premier League executives during negotiations for overseas broadcast rights.
The clubs will also be used to offer hospitality to influential figures in football as the campaign develops ahead of the vote by FIFA's executive committee in December next year.
Premier League chief executive Richard Scudamore said: "Everyone involved in English football, at all levels, knows what an exciting prospect bringing the FIFA World Cup to England would be, which is why it is important for the Premier League and our 20 clubs to support the bid in the best way we can.
"We have been working hard with bid chief executive Andy Anson and his team to look at how we can support their efforts as we enter a crucial phase in the bid process.
"The Premier League's exposure combined with the clubs' communications and marketing expertise will give England's bid a presence and impact around the world worth millions of pounds and will get their message out right across the world."
The major change to the bid board on Thursday was the inclusion of Geoff Thompson, the former FA chairman who is now a FIFA and UEFA vice-president, and that was recognised as a significant development by Scudamore.
He added: "We are also liaising with Geoff Thompson to see how the Premier League might further help the England 2018 bid, including promoting it as we sell our international rights.
"The bid will draw on the support and passion for the Premier League, our technical merits, the legacy we can provide, and the range of partners and relationships that we have right across the football world.
"In the Premier League we have many of the world's best players competing in some fantastic stadia - we hope that we can use the interest this generates to promote the England 2018 Bid and highlight this country as an excellent potential FIFA World Cup host nation."

#Premier League to help rescue 2018 World Cup bid
You May Also like: