Pressure on Celtic as Europa League 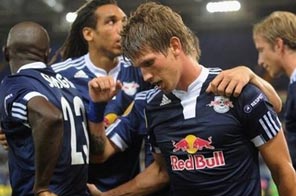 PARIS: Celtic manager Tony Mowbray is under pressure to end a sorry run of home results that have left the Glasgow giants in a virtually must-win situation against Europa League rivals Hamburg on Thursday.

Fulham and Everton will also be in action, against Roma and Benfica, respectively but with the English Premier League sides sitting pretty atop their groups the pressure is all on Celtic.

After two of their six games the Scots are bottom of Group C with a point, and a three-point deficit to Rapid Vienna who held them 1-1 in Glasgow last time out.

Counting the scoreless draw with league opponents Motherwell last weekend, the Hoops now just have two wins from seven home games in all competitions so far this season.

All talk of a crisis has been stifled by Mowbray, and he remains defiant that his team have not been playing below par.

"I defy anyone to say there was a lack of effort and lack of determination about the way the team went about the job," he said after the Motherwell result.

"If we had scored two of our 15 efforts on goal we would have been sitting here saying job done, let's move on to next week."

Everton are among five of the 12 group leaders that have won their first two group fixtures.

But the perfect record of David Moyes' side could be tested by the fact they have never played Benfica, and are likely to still be without South African forward Steve Pienaar due to a knee injury.

After missing games against BATE Borisov, Stoke City and Wolves, he believes playing at Benfica's Lison ground, the Stadium of Light, could ruin his chances of a full recovery.

Pienaar told the Everton website: "The Benfica match could be one game too soon but I am taking it day-by-day. At the moment I am struggling with running so I may have to wait until it feels stronger."

After a win and a draw Fulham top Group E on four points and welcome Roma to Craven Cottage in the hope their coach, Claudio Ranieri, remembers little of the team from his spell as coach of Chelsea.

Going on statistics, Fulham have a good chance of coming out on top on what is the clubs' first meeting.

Senegalese striker Diomansy Kamara knows all about Roma having scored against them when he played for Modena in Italy.

And having scored one of the two goals in the 2-0 defeat of Hull City on Monday, Kamara hopes his partnership with Bobby Zamora pays dividends again.

"The European games are great and it's a really important competition for us. We're top of our group at the moment and it's a big, big game on Thursday night against Roma," said Kamara.

"I've played against Roma in the past when I was in Italy and I've scored against them when I was playing for Modena - I hope I can do that again on Thursday night!"

Valencia, winners of the competition in 2004, sit joint top of Group B with Lille ahead of hosting Slavia Prague.

Defending champions Shakhtar Donetsk, winners of the final UEFA Cup in 2009, top Group J with six points and will be looking to continue the pattern when they host second-placed Toulouse.

Toulouse may not be among the French league giants but boast the killer striking talents of French international Andre-Pierre Gignac.

#Pressure on Celtic as Europa League group stage continues
You May Also like: