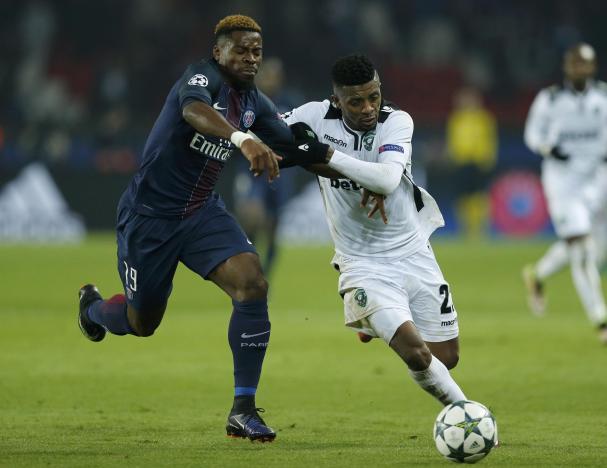 Paris St Germain's Serge Aurier in action with PFC Ludogorets Johnatan Cafu. REUTERS
PARIS: French champions Paris St Germain face the prospect of a tough last 16 Champions League match despite snatching a last-minute equaliser through Angel Di Maria to draw 2-2 at home to Ludogorets in their final group game on Tuesday. PSG had to at least match Arsenal's result at FC Basel to top Group A but, after losing to Montpellier in Ligue 1 at the weekend, the Parisians again defended carelessly enabling the London side to overtake them with a 4-1 win in Switzerland. Arsenal finished with 14 points from their six games ahead of PSG on 12, Ludogorets - who qualify for the Europa League last 32 - with three points and Basel on two. "We had a lot of chances, corners, crosses and deserved to win," said PSG coach Unai Emery. "It's a bad result. I'm worried because we don't usually let in so many goals. "We can turn things around against (Ligue 1 leaders) Nice on Sunday but in the end the most important thing is that we're through," added the Spaniard. Emery opted to play with Hatem Ben Arfa operating in the hole behind Edinson Cavani and it helped his team dominate possession in the early stages, but it was Bulgarian side Ludogorets who took the lead in the 15th minute. After some sloppy midfield play the home side were opened up on the left. Natanael delivered an inch perfect cross for the unmarked Virgil Misidjan to slot a header past Alphonse Areola. Ludogorets had shown at home to Arsenal last month - when they led 2-0 before eventually losing 3-2 - how dangerous they could be on the counter-attack and the pacy Wanderson and Jonathan Cafu again showed their potency on the break. PSG forward Lucas Moura terrorised right-back Cicinho, while captain Thiago Silva sent a header inches wide from a corner in the 32nd and three minutes later hit the post as the hosts streamed forward searching for an equaliser before halftime. With the boisterous home fans urging their team on, PSG came out with more bite in the second period. They were rewarded in the 61st minute when Cavani anticipated a mistake by the defender and levelled with an acrobatic overhead kick. But more sloppy defending saw Marquihnos lose possession in the 69th. Cafu surged forward on the right and cut the ball back to Wanderson, whose shot went in off the post to silence the home fans. Argentine Di Maria then grabbed an equaliser in the 92nd to salvage a draw but it was not enough to win the group. "We knew this team played good football. We'll have to watch the match again, analyse it and grow up," said Cavani.
#Champions League #Arsenal #Paris St Germain #Angel Di Maria
You May Also like: