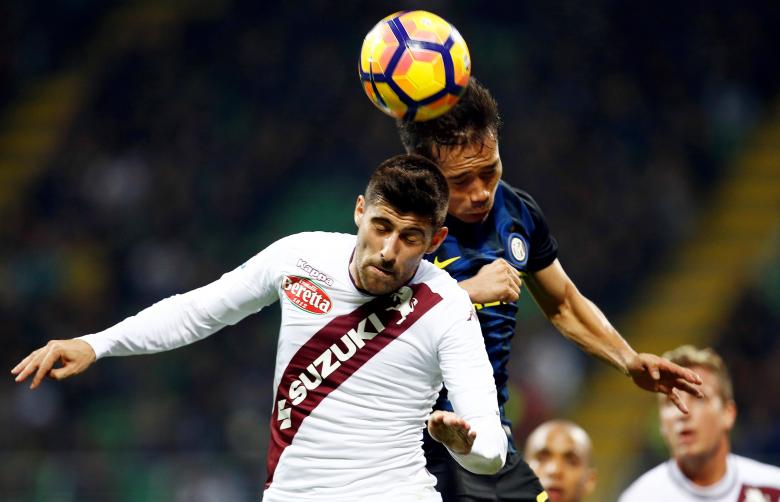 Inter Milan's Yuto Nagatomo in action against Marco Benassi of Torino. REUTERS
Mauro Icardi scored with two minutes left to give Inter Milan a dramatic 2-1 win over Torino which possibly saved beleaguered coach Frank de Boer's job on Wednesday. The Argentine forward also scored Inter's opening goal in a typically hit-and-miss display but they looked set for another frustrating evening after Andrea Belotti took advantage of a mix-up in the Inter defence to equalise. Juventus defender Giorgio Chiellini scored two goals to give the leaders a 4-1 win over Sampdoria as they quickly bounced back from Saturday's defeat at AC Milan. Leading scorer Edin Dzeko also scored two, taking his league tally for the season to 10, to help second-placed Roma come from behind and beat Sassuolo 3-1 away. The Bosnia international has already scored two more goals than he managed in the whole of last season. Ciro Immobile was another to score a brace, in Lazio's 4-1 win over Cagliari. Juventus, with 24 points from 10 games, stayed two clear of Roma while Napoli moved into third place, a further two points behind, by beating lowly Empoli 2-0. De Boer, who has only been in charge for 13 games, was under threat after Inter lost their last three league games and club president Erick Thohir was in the crowd at the San Siro, having travelled from his native Indonesia, along with directors of Chinese owners Suning. Inter went ahead after 35 minutes when Torino goalkeeper Joe Hart anticipated Antonio Candreva's pass into the area but failed to hold the ball which rebounded off Icardi and into the net. Marcelo Brozovic should have put Inter further ahead in the 62nd minute when his first effort went straight at Hart and he headed the rebound over the crossbar. Torino went straight down the other end, two Inter defenders got in each other's way and the ball broke for Belotti who lashed a ferocious effort into the roof of the net. Brozovic and Candreva both missed clearcut chances before Icardi rescued Inter, collecting Joao Mario's pass with his back to the goal, wriggling free of his markers and unleashing an unstoppable shot on the turn which flew past Hart. The win allowed Inter to climb from 14th to 10th - still well below expectations. Juventus made light work of Sampdoria as headers from Mario Mandzukic and Chiellini put them 2-0 ahead in just eight minutes. It was not all plain sailing as a poor back pass by Chiellini allowed Dennis Praet to set up Patrik Shick in the 57th minute. But Miralem Pjanic scored again for Juve and Chiellini made amends by heading a fourth from Juan Cuadrado's cross. Roma fell behind to a Paolo Cannavaro header in the 12th minute and trailed until the 57th minute when Dzeko broke down the left and scored with an angled shot. Dzeko won and converted a penalty in the 76th minute, Radja Nainggolan added another two minutes later to guide Roma to an impressive win.
#Inter Milan #Mauro Icardi #Frank de Boer #Andrea Belotti
You May Also like: