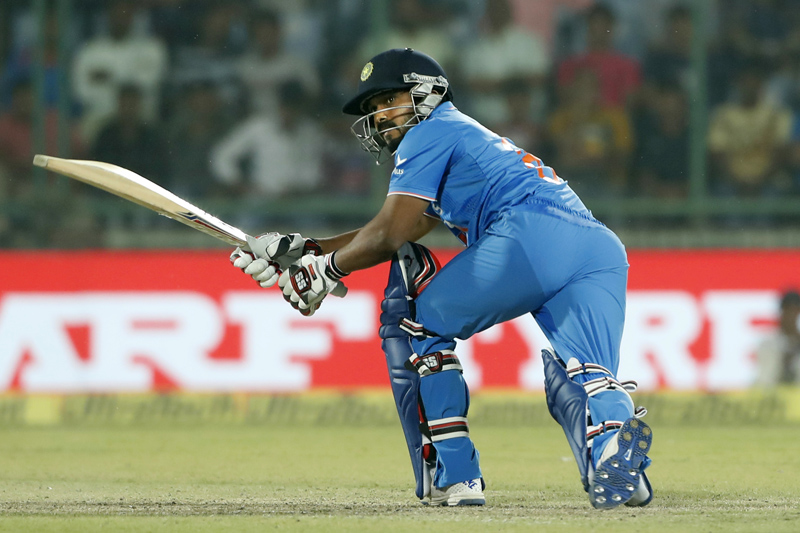 India's Kedar Jadhav plays shot against New Zealand during their second one-day international cricket match in New Delhi, India, Thursday, Oct. 20, 2016. Photo: AP
DUBAI: Kedar Jadhav's part-time spin might be his ticket to next year's World Cup in England but the 33-year-old Indian batsman admits he is reluctant to work too hard on improving as a bowler. Then captain Mahendra Singh Dhoni first persuaded the unorthodox middle-order batsman to roll his arm over in an one-day international against New Zealand in 2016 and he picked up two wickets for six runs in three overs. On Wednesday, Jadhav returned his best ODI bowling figures of 3-23 in the Asia Cup clash in Dubai, his nine overs of off-spin snuffing out Pakistan's hopes of a competitive total. "Honestly, I bowl one or two overs before the match during the practice session," he told reporters after India's eight-wicket victory over their arch rivals. "I don't bowl much at the nets. I feel if I try too hard to become a bowler, I will lose whatever I have. So I stay within limits." With openers and regular captain Virat Kohli occupying the top three spots and wicketkeeper Dhoni a floating option in the batting order, a number of players have auditioned for the middle order over the last couple of years. Ajinkya Rahane, Suresh Raina, Ambati Rayudu, Manish Pandey, Dinesh Karthik and Jadhav himself have all had a crack but none has managed to nail down a spot. Barring the virtuoso Raina, though, only Jadhav can offer a contribution with the ball to go along with his batting. Jadhav's unique slingshot action makes it difficult for batsmen to pick and with his subtle change of pace and trajectory, the Maharashtra cricketer has proved a useful option for the captain. Against Pakistan on Wednesday, stand-in skipper Rohit Sharma would have been worried when all-rounder Hardik Pandya left the field on a stretcher due to a back injury in his fifth over but Jadhav stepped in and did a stellar job. "My bowling is all about trying to read the batsman, my plan is to bowl stump to stump," Jadhav added. Jadhav, who has scored two centuries and three half centuries in 42 ODIs, missed most of the 2018 Indian Premier League with a hamstring tear, which also kept him out of the limited-overs series in England. He needed surgery on the injury and believes he has returned fitter and stronger. "In the last six months, I've been injured more than three times on my left hamstring. After the IPL, again I got injured, so we decided to go for surgery," he said. "I feel after the surgery it has definitely helped me fitness wise ... In the last four months, I've learnt a lot about training and fitness, and it has definitely made me a different cricketer."
#Ajinkya Rahane #Mahendra Singh Dhoni #Ambati Rayudu #Kedar Jadhav #Manish Pandey #Suresh Raina #Dinesh Karthik
You May Also like: