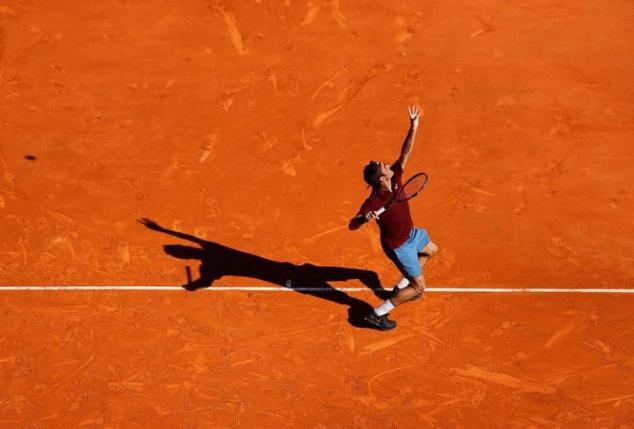 Roger Federer of Switzerland serves to Guillermo Garcia-Lopez of Spain. REUTERS
Former world number one Roger Federer returned from a 10-week layoff with a 6-3 6-4 second-round victory against Spain's Guillermo Garcia Lopez at the Monte Carlo Masters on Tuesday. The third-seeded Swiss had knee surgery on Feb. 3 and was forced to delay his scheduled comeback in Miami because of gastroenteritis. Federer, who has failed all 12 attempts to win the first claycourt Masters of the season, was barely bothered by the world number 38. The only glitch he suffered came when he was broken as, leading 5-2 in the second set, he was serving to win. He will next face either Germany's Alexander Zverev or Spain's Marcel Granollers, who was picked in the main draw after fellow Spaniard David Ferrer withdrew with a leg injury. Back in Monte Carlo for the first time since 2013, world number two Andy Murray laboured into the third round with a 6-2 4-6 6-3 defeat of France's Pierre-Hugues Herbert.
#Roger Federer #Guillermo Garcia Lopez #Monte Carlo
You May Also like: